For Blood and Empire is the fifth studio album by American punk band Anti-Flag, released in 2006. In the same year, the song “The Press Corpse” entered the Hot Modern Rock Tracks Chart. Anti-Flag are known for their politically charged songs, often criticising right wing policies and conservative ideologies. For Blood and Empire was released during the reign of George W. Bush, so naturally the album boils over with vehement anti-Bush attacks and confrontational lyrics that overwhelmingly target the war in Iraq. Featuring classic Anti-Flag songs “The Press Corpse”, “This is the End (For You My Friend)” & “Depleted Uranium Is A War Crime (feat. Tom Morello)” and “1 Trillion Dollar$”. The LP set includes an 8-page booklet, which contains short essays for all but two songs, providing more in-depth perspective on the inspirations for the song subjects. 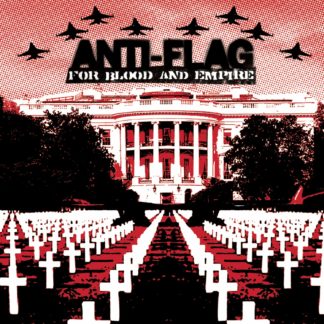