Devastating French Post-Hardcore three piece BIND TORTURE KILL release their second high speed slab of chaotic blackened post hardcore on the album ‘Viscères’. Following in the footsteps of giants like Trap Them and Converge but finding heavier emphasis in ‘blackened’ elements than either.

‘Blackened’ here referring to moments of echoing reverb, hanging on an abyssal chord for a few seconds, or giving in to brief exaggeratedly blasting trem-picked sections. However this tag should not detract from what is primarily a thorough study in chaotic post-hardcore.

Recorded at Warmaudio in their native Lyon BIND TORTURE KILL pluck at the essence of the classic ‘Relapse Hardcore’ sound; fast guitar runs interspersed with RIFFS pulled from the aether, instilling a contemporary twist on it with a clanging, raw production sound, atmospheric dynamic breaks and tight instrumental performances. The album pulses with swelling instrumental interludes providing parenthesis around solid chunks of blast-tinged, rolling chaotic hardcore. Vocally frontman Olivier delivers verse in native French, providing discourse in the manner of prose, dealing with the horror and darkness found for many in contemporary society, murder, drug abuse and the almost exclusively death metal territory of ghoul behaviour (grave robbing).
These themes are all symboloised in the artwork, providing stark monochrome imagery of a jackal and vultures fighting over a carcass.

BIND TORTURE KILL are really pushing the boundries of what can be acomplished by a single guitarist and drummer line up (albeit with three amps, ala Magrudergrind), using intelligent song structure and aplication of pedals the band really sounds like the “full” two guitars and bass more usually seen in the genre. Track times on this 34minute, 9 song release vary in length from under two minutes to over seven, this speaks to the band’s ability to write diverse music while retaining their own sound and not straying from being very firmly grounded in the Post-Hardcore genre. 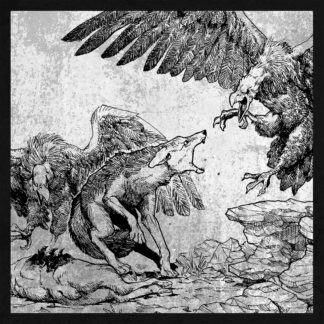