Commuters is the first full-length by the unconventional Swiss trio Coilguns. Within less than 2 years of existence, the band has already released 3 EP’s, played 2 European tours and had the chance to support bands like The Dillinger Escape Plan, Baroness, Norma Jean, Nasum and Black Breath.

Coilguns’ line-up is pretty unique: drummer Luc Hess and guitarist Jona Nido are the only instrumentalists in the band. A massive custom-built pedal board and a well thought-out chain of several amps allows Jona to sound like 2 guitar players and a bass player altogether. Vocalist Louis Jucker completes the lineup.

Commuters was entirely recorded live, every song in one take. To challenge themselves and as a stance against « email albums », several musicians have been invited to take part in the recording process, including Keijo Niinima of Rotten Sounds / Nasum fame, who came down to Switzerland to lay down guest vocals on one track.

On their debut album, the incorporation of synths and more guitar and bass loops has added more depth to their original punky version of mathcore. Some tracks on the album are featuring up to 5 guitar players at the same time. No overdubs or edits have been made on this record except for the vocals.

Coilguns have been pushing their boundaries to find a unique and most certainly odd sound, and by simplifying their songwriting, they’ve intensified and emphasized their heavyness.

Long time friend Julien Fehlmann was in charge of mixing and mastering the album and his experience and approach to this record was as unconventional as the band’s new songs. The whole record has been approached more like a 70’s rock record than a metal album. What came out is a mix that is different from anything you can hear in modern productions.

The band, who used to manufacture their records on their own (including hand-sewed and wax-sealed packagings), has opted for a slick 6 panel- digipak in the shape on an upside- down cross (CD version) and a fancy hand-made silk-screen printed vinyl version (3 different vinyl colors) this time around. The artwork was done by Spitzhorn, a Swiss duo dedicated to avant-garde design. 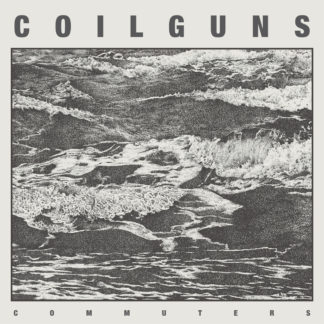