Grave Pleasures release new live album, Doomsday Roadburn, from their atomic performance on the mainstage of Roadburn Festival 2018. Features songs from Beastmilk’s Climax and their most successful album yet, Motherblood, including 2 unreleased tracks from the Motherblood recording sessions.

Captured at their climactic and triumphant main stage show at Roadburn Festival, where they had the stoner crowd dancing in rapture like never before, Grave Pleasures have never sounded so alive. Doomsday Roadburn features a bludgeoning non-stop raw barrage of hits to a rapturous crowd. From songs hewn from their underground origins in their previous incarnation as Beastmilk, from the Climax record, and break-out hits from the album which stands as the jewel in their crown, the critically acclaimed Motherblood, the recording is a bottled tour de force of an explosive band on fire. Also including two previously unreleased songs which were left off the Motherblood recording sessions, Violence Of Night and There Are Powers At Work In This World, this album is a for any fan or newcomer who might be late to this apocalyptic party. Limited in pressing and beautifully packaged with exquisite artwork by Daniel Martin Diaz, and including a large booklet with beautiful monochrome photos from the show, this is the real deal and every bit as astute and artful as any release from the Grave Pleasures/Beastmilk back-catalogue. Receive your dose of deathly joy and get high on this mushroom cloud. 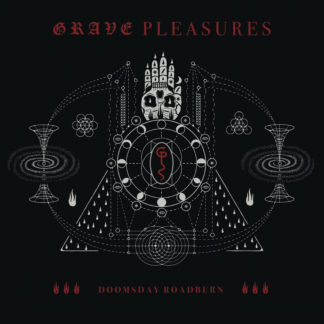