The lucky thirteenth record by Hey Colossus is the work of six musicians in tune with the dualities of life as a loud rock band, fit to channel both the dances of aspiration and the curses of reality into a record that transcends all limitations in a blinding volley of incandescence.

When the band first began work their innate chemistry apparently took care of itself, and whatever sparks were spontaneously flying gave rise to enough material to make Dances/Curses a double record, running the gamut from the rhythmically-driven and infectious ‘Donkey Jaw’ and ‘Medal’ to the mightily motorik-powered and cinematic 15 minute travelogue that is ‘A Trembling Rose’,

Longterm Hey Colossus fan Mark Lanegan makes an appearance amidst the languid and sun-soaked denouement of ‘The Mirror’, the existential gravitas of his tones entirely at home in these revelatory surroundings.

Fittingly Dances/Curses is released on bassist Joe Thompson’s own Wrong Speed record, his latest such venture in a lifetime of steadfast belief in the DIY maxim, “It’s 100% time for all bands to take control of their shit” he notes. All the tools are there to do it yourself. Back your own horse. It’s practical. It’s positive”

This serendipitous album marks something even these six musicians never necessarily intended – a work in the tradition of the double album that somehow changes itself every time it returns to the shelf. Somewhere on the great continuum between Unwound’s Leaves Turn Inside You and Stevie Wonder’s Journey Through « The Secret Life Of Plants », Hey Colossus have created their finest alchemical achievement to date. 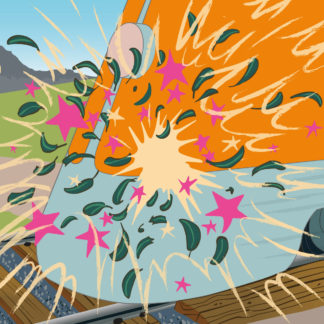