Electric Messiah by High On Fire

“I had a dream about Lemmy,” says Matt Pike, explaining the inspiration behind the title of High on Fire’s triumphant eighth album Electric Messiah.

“When Lemmy was still alive I always got compared to Lemmy,” the gravelly-voiced guitarist elaborates, “so I had this dream where he got pissed at me. He gave me a bunch of shit, basically, and was hazing me. Not that he didn’t approve of me, but like I was being hazed. The song is me telling the world that I could never fill Lemmy’s shoes, because Lemmy’s Lemmy. I wanted to pay homage to him in a great way. And it turned out to be such a good title that the guys said we should call the album Electric Messiah. Although at first the working title was ‘Insect Workout With Lemmy’,” he adds with a big laugh.

Electric Messiah, the best and most diverse of the band’s three albums with Ballou, and a record Pike cannot stop gushing about. Justifiably, too. There’s more speed than ever before (the aforementioned title track, the raucous opener “Spewn From the Earth”, and the thrashy, Sir Francis Drake-inspired “Freebooter”) but the dynamics of Electric Messiah hold the listener riveted.

Of note is the nine-minute Sumerian historical epic “Steps of the Ziggurat/House of Enlil”, which Pike proudly calls his own “rock opera”. “The song is the creation story of the Sumerians, the weird dichotomy of two gods fighting over power. I put it into two parts because it’s my Sumerian rock opera. At the end I play three different characters: I play the two brothers that clash, and I play Isis, and there’s a high, medium, and low part. It’s very theatrical. I felt like Meat Loaf doing it, but at the same time Bryan Sours at the studio went, ‘I don’t know what you just did, but that’s fucking cool, just keep doing that!”

For all the dream visions and historical epics, the state of the real world permeates Pike’s writing on Electric Messiah as well, none more blatantly than on the bluesy closing track “Drowning Dog”. “That one is about the media and the tomfoolery that’s going on,” Pike explains. “You’re either left or right. Do you see how they’ve divided us through the media? I’m basically saying, ‘Do you see how stupid we are?’ Someone’s gotta speak out and say shit like that, or we’re going to continue to be worse slaves over time. They set this shit up so they can keep us under wraps. What they’re afraid of is us ascending and evolving and understanding our past for real. That was the point of a lot of this last album. People not reading the writing on the wall.” 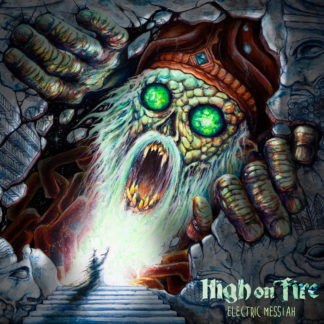