London five-piece Housewives return for more anarchic genre-blending adventures on their second LP, Twilight Splendour; A synthesized collage written in Wetherspoons, cafes and anywhere away from their houseboats where they could find a permanent electrical supply.

Exploring the possibilities of electronic sound, this new LP marks a turning point for the band – who sold their guitars to buy midi equipment and swapped London rents for water habitation. Bringing to mind the digital meditations of legendary producer Oneohtrix Point Never, Twilight Splendour presents a love letter from an early AI to its owner, its concept-led songs strewn with “ecstatic messages of frustration and a desire to connect”.

The album occupies a dystopian world where real emotions have been eclipsed by complex coded simulations. From the dead-behind-the-eyes chanting on ‘Speak to Me’ to the heavily processed vocals on the sax-loaded ‘SmttnKttns’ – which dazzles with vocoder and pop shine – the band’s signature dark, psychedelic chaos and nihilism has been cast into an unnerving new technological light.

On opener, ‘Beneath the Glass’, Housewives set the scene for the alternate world occupied throughout Twilight Splendour: “Slip with me, under the glass and into the light / I only choose content that I know you’ll like”—beckoning the listener to retreat away from the mundanity of everyday life and into the warm comforting glow of digital anaesthesia.

With ‘Dormi’, Housewives create skin-crawling tension and atmosphere from pulsing rhythms, dub-infused bass, clock chimes and a haunting MIDI choir, while ‘Texu’s’ off-beat drumming forms the backdrop of the track’s mythology—an ancient alien making a mixtape of mediocre jazz for a lover.

Diverted creative energy is explored with the chaotic tension of ‘Sublimate pt. I’ which flows into the cathartic bliss of ‘Sublimate pt. II’ using maniacal vocal samples in a challenging take on a life not lived ‘never dream for more than boredom, now defines us’. Closing the record out on a new age note, ‘Hexadecimal Wave / Binary Rock’ swells with deep organ-led euphoria; a moment of respite on an album buzzing with industry.

Since forming five years ago, Housewives have drawn from such diverse scenes as post-punk, jazz, drone, electronic and avant-garde. 2013 saw the release of an eponymous debut EP via Brighton label Faux Discx, while their first-full length record, ‘Work’—recorded at a barn in a desolate corner in the south of France—arrived two years later.

2017 live album FF06116 marked the band’s first collaboration with experimental saxophonist Ben Vince. Following on from these early statements, Housewives are now set to unleash their game-changing new album—turning away from performance-based writing, the human, and facing the cold light of computers head on. 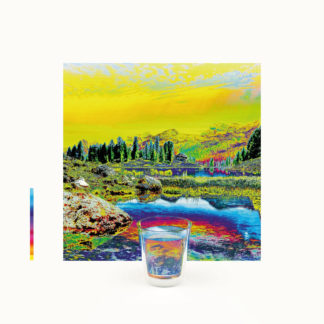