Wild Wonderful Purgatory is Karma To Burn second album. Is their first fully instrumental album after the departure of former vocalist Jay Jarosz and it was released in 1999 by Roadrunner Records.
After more then 20 years this piece of stoner rock history will have a new repress in coloured vinyls via Heavy Psych Sounds.

Heavy metal has, too often, been a case of great music, shame about the singer. It’s been true since the cod-poetic warblings of erstwhile-hippy cock rockers, right up to the present-day offerings of sad white boy pseudo-rappers. So hats off to Yank rockers Karma To Burn, who had the sense, the taste and the balls (don’t forget the balls) to part with their tiresome vocalist, minutes before an important London gig… Wild Wonderful Purgatory is their first album in this new incarnation. And it rocks, hard.
Tracks are numbered rather than titled, in the order in which they were recorded. So ’32’ is the slaughterhouse groove characterised by the wildfire barbed wire guitar breaks; ’25’ is the slothful Sabbath grind; ’30’ the colossal, feral beast with all the ferocity of a Rottweiler which has been chained up and fed nothing but raw, red meat for weeks.
If there’s an overall stoner-rock vibe to the proceedings, then it is tempered by Karma To Burn’s discipline: not a single note is wasted, and there’s no big-haired egomaniac chundering artlessly along to distract you from the hypnotic beauty of the riffs. Sniff out the testosterone, strike that match, and stand well back. – NME 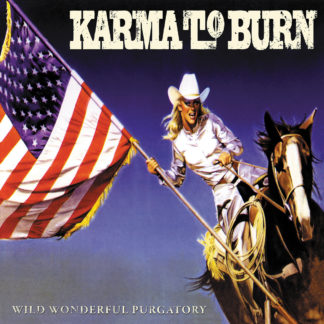