Formed in 1993, Low is from Duluth, Minnesota, and features Alan Sparhawk on vocals and guitar, Mimi Parker on vocals and drums, and Matt Livingston on bass and vocals. Sparhawk and Parker are married with two children; they first met in fourth grade in rural Minnesota. Drums and Guns is the band’s eighth full-length album and second for Sub Pop. It’s also, after 2005’s The Great Destroyer, the second album they’ve recorded with producer Dave Fridmann. Drums and Guns features a number of songs that ardent Low fans will recognize from the band’s recent live shows. These songs appear here in substantially altered forms, as though they’ve been taken apart and reassembled in striking new ways, or seen with new eyes. Or, given the lyrical emphasis on murder and death, a more insightful interpretation might see the band killing these songs and bringing them back to life anew. There’s no contrivance here, however. While these songs feature new elements (looped vocals, drum machines, etc.) and are thoroughly, radiantly contemporary, they remain undeniably Low’s. Drums and Guns possesses the unique, subtle beauty and power we’ve come to expect from Low, but the record is also profoundly exciting in ways that it’s easy to forget music can be. 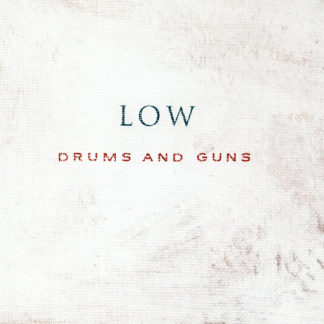