We are both pleased and proud to be releasing a new album by Mayerling, “Roche”. More than five years have gone by since we collaborated with the talented musician behind the project, Sylvain Bombled – who, like HITD itself, hails from Besançon, France – and put out his first brilliant album “Cut up”.

It’s more electronic and bold than the first album… less traditional, more adventurous. The guitar has given way to synths and other analogue sequencers. As for the vocals, they have all but disappeared, as though the listener should be left to be totally taken in by the beguiling, trippy graphic powers and cinematic quality of the new compositions. These ambient hymns reveal something new to the listener with each playback. The rich production and fine details guide us through arid, solitary lands, striking us like the midday sun in Death Valley. 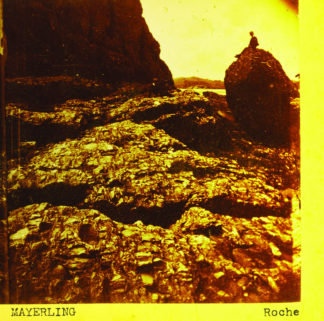