With An Object, their fourth full-length album, No Age has forgone the straight and narrow route, landing in a strange and unexpected place, feet planted in fresh, fertile soil. This new LP finds drummer/vocalist Dean Spunt exploding from behind his kit, landing percussive blows with amplified contact mics, 4-string bass guitars, and prepared speakers, as well as traditional forms of lumber and metal. Meanwhile, guitarist Randy Randall corrals his previously lush, spastic, sprawling arrangements into taught, refined, rats’ nests. Lyrically Spunt challenges space, fracturing ideological forms and complacency, creating a striking new perspective that reveals thematic preoccupations with structural ruptures and temporal limits. As the title An Object suggests, these eleven tracks are meant to be grasped, not simply heard. Whether in the fine grit of Randall’s sandpaper guitar scrapes on “Defector/ed,” or Spunt’s percussive stomp and crack on “Circling with Dizzy” and “An Impression,” these are songs that pivot on the sheer materiality of music-making, incorporating the process every step of the way. Still, this is hardly a work of avant garde noise music. These songs are hummable, political, recognizably rooted in underground rock, and informed by an understanding of sound as a material to be shaped, handled, and worked over. It is an aesthetic in which the relationships between guitar, percussion, and vocals—as well as those between rhythm and melody—become relationships between things.

These relationships are built into An Object at every level. In collaboration with friend and Grammy-nominated designer Brian Roettinger (5 E.P.‘s, Nouns, Losing Feeling, Everything In Between), the band prepared and assembled the physical packaging of An Object, including jackets, inserts, and labels, fusing the roles of manufacturer, artist, and musician into one. It is this sense of the total work of art that underlines An Object as the culmination of two years of touring, writing, and performing, finding No Age moving into new terrain at the height of their powers.

An Object was recorded by longtime No Age collaborator Facundo Bermudez and No Age at Gaucho’s Electronics in Los Angeles. 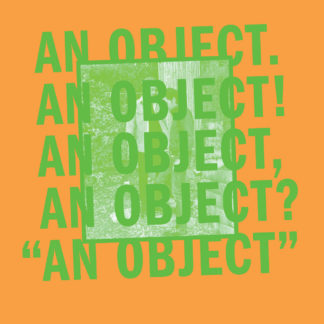