NOSTROMO’s new album ‘Bucephale’ is the band’s first full-length over 20 years, since ‘Ecce Lex’ in 2002. Darker than their previous releases, the record perfectly blends extreme and black metal. Both sonic universes merge with intelligence and maturity to produce constant osmosis during 10 brutal and technical tracks. ‘Bucephale’ is peppered by top-notch collaborations with heavy psychedelic unit Monkey 3 on “Asato Ma” and ritual ambient artist Treha Sektori (Church Of Ra) on “κατάϐασις” (Katabasis). The latter also crafted the artwork under his art project Dehn Sora.

“The intention was to deliver something more accomplished, with more diversified compositions but in the continuation of “Narrenschiff”. An album is a long-term exercise, with a dynamic, a colour, which allows to elaborate ideas on more accomplished compositions. The collaboration with Treha Sektori (Church of Ra) was born with the proposal to participate in Major Arcana during the Red Bull Music Academy at Trianon in Paris by the end of 2019, where 2 artists were collaborating on a show by combining their musical universes. The proposal came from graphic design duo Førtifem, who took care of the art direction and visual projections during the whole night. We met Monkey 3 on a gig and stayed in touch with them. Nostromo has always been crafted by meetings, and stepping out of our comfort zone helps us to move forward.” 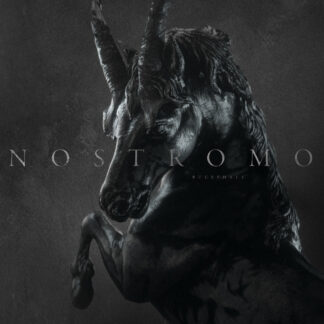