The answer to the question, “Are Obits ‘indie rock veterans’?” is yes and no. Yes, they are accomplished musicians who once fronted Drive Like Jehu, Edsel, Hot Snakes, and Pitchfork. But also; No, they are not active or retired members of the United States military. It’s good to get these things sorted out. Don’t worry—there are no dumb questions.

Are Obits a young band? They are. Another good question. A child born in 2007, when Greg Simpson joined as bassist, would not yet be in kindergarten. Obits didn’t self-release their first single (“One Cross Apiece” b/w “Put It in Writing”) until late 2008. Their debut LP (I Blame You, on Sub Pop), wasn’t released until March 2009. Does their stripped-down rock incorporate elements of surf and garage? Absolutely it does. The members of Obits are fans of oldies. They generally dislike newies. But their influences simmer in the crock-pot of human creativity; you will find only disappointment if you try to deduce the muse of any given song.

What of Obits’ new record? Well, for starters, it’s their second full-length, and it’s called Moody, Standard and Poor. It was recorded at Brooklyn’s Saltlands Studio by Eli Janney and Geoff Sanoff. Sub Pop will release it on March 29, 2011. And how will Moody, Standard and Poor make you feel? The short answer is: great. Not Smoking-An-Eightball-Of-Coke great. But Alive-To-New-Listening Experiences great. The long answer is that these twelve songs will take you on a series of emotional road trips. Some will be as brief as a walk to the fridge. Others will be epic pilgrimages to the shady hinterlands of your subconscious. Great records can do this. Moody, Standard and Poor is no exception. 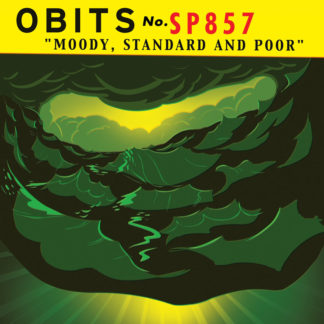