Obsidian… dark, reflective and black: it’s a pretty decent description of the music that PARADISE LOST have been making over the last 32 years, even though this most resilient of British metal bands have stoically refused to be pinned down to one easily defined formula. Powered by a lust for creativity and a stout devotion to haunting heaviness, PARADISE LOST have defied the odds by coming back stronger than ever over the past decade.

“We’re doing really well right now,” says guitarist and co-founder Greg Mackintosh. “The last few albums have gone down well and we’ve gradually moved back up the festival bills. But for me, I think about it more in terms of being relaxed and content. It’s a good time to be in PARADISE LOST.”

Formed in Halifax, West Yorkshire, in 1988, PARADISE LOST were unlikely candidates for metal glory when they slithered from the shadows and infiltrated the UK underground. But not content with spawning an entire subgenre with early death/doom masterpiece „Gothic“ nor with conquering the metal mainstream with the balls-out power of 1995’s „Draconian Times“, they have subsequently traversed multiple genre boundaries with skill and grace, evolving through the pitch-black alt-rock mastery of ‘90s classics „One Second“ and „Host“ to the muscular but ornate grandeur of 2009’s „Faith Divides Us – Death Unites Us“ and „Tragic Idol“ (2012), with the nonchalant finesse of grand masters. The band’s last two albums – „The Plague Within“ (2015) and „Medusa“ (2017) – saw a much celebrated return to brutal, old school thinking, via two crushing monoliths to slow-motion death and spiritual defeat. Consistently hailed as one of metal’s most charismatic live bands, PARADISE LOST arrive in this new decade as veterans, legends and revered figureheads for several generations of gloomy metalheads. In keeping with their unerring refusal to deliver the expected, 2020 brings one of the band’s most diverse and devastating creations to date.

“When we came to write this record, we just sat down, had a think about it and said ‘Let’s see what comes out!’” says Greg. “We never went through that thing of signing to big labels and being under constant pressure. The pressure always came from ourselves anyway. I just wanted it to sound a little more polished than the last one and a little less caveman-like in the rhythm section! (laughs) I suppose that was the only brief, really. On Medusa we did the whole fuzzed-out slow thing, throughout the entire record, so if it was that again it would bore me as much as anyone else. So there’s a bit more variety on this one.”

The sixteenth PARADISE LOST studio album, „Obsidian“ eschews its immediate predecessors’ gruesome, myopic approach in favour of a richer and more dynamic deluge of black shades. From the deceptive elegance and dual atmospheres of opener ‚Darker Thoughts‘ through to the crushing, baroque doom of war-torn closer ‚Ravenghast‘, „Obsidian“ reveals a band in masterful control of a broad array of vital ideas. Most noticeably, the record boasts several songs that draw heavily from the much-loved, Kohl-encrusted days of ‘80s gothic rock: in particular, newly-minted PARADISE LOST anthems ‚Ghosts‘ is a guaranteed dancefloor-filler at any discerning goth nightclub.

“At this point there aren’t a lot of people alive that remember the ‘80s goth scene!” laughs Greg. “So hopefully it’ll sound like a fresh thing to a lot of people. But things go round in circles. There used be a goth pub or club on every corner in the late 80s, and now there’s none. It’s just something I used to like at the time but daren’t admit to! Doing this as long as we have, I don’t care anymore, you know? The first album I bought was The Kids From Fame, so fuck it. (laughs)”

“Over the last ten years Greg’s really been into the death and doom stuff,” notes frontman and co-founder Nick Holmes. “But when he does write that goth stuff he’s really good at it, so I encouraged him to do more of it! He’s got a knack for it, and it’s just nice to break the album up a bit. You can fit all these different styles under one roof and it all still works together. I do prefer to mix the styles up a bit, do the subtle stuff as well as the full-on stuff!”

Produced by the band themselves, with the assistance of noted studio guru Jamie ‘Gomez’ Arellano, „Obsidian“ is another compelling showcase for Paradise Lost’s ever-blazing passion for forging ahead. Fans of the last two albums’ back-to-basics ferocity will be well served by the menacing, scabrous likes of ‚The Devil Embraced‘ and ‚Serenity‘, while those of a more gothic persuasion will be instantly mesmerised by ‚Ghosts‘, icy anti-ballad ‚Forsaken‘ and the gloriously morose ‚Ending Days‘. In between those extremes, PARADISE LOST continue to warp the edges of their long established musical identity, resulting in some of the boldest and most adventurous songs of their career to date. Nobly upholding his band’s mystique, Holmes remains reluctant to unpick the details of his lyrics, but „Obsidian“ is clearly an album with a lot on its troubled mind.

“There’s no grand theme. It’s just about how I feel at the time,” Nick explains. “If there is an idea or a concept behind it, it’s the idea that certain decisions can affect you and your life much further down the line, like the Butterfly Effect. I love that concept, that you might do something today that could affect something much later. It’s very much like an episode of Curb Your Enthusiasm, when Larry David says something to someone earlier in the show and you know that he’s going to need that guy’s help later on, but he’s already fucked him over! (laughs)”

Fans of PARADISE LOST‘s crushing doom phase have no reason to fear Obsidian’s diverse approach. Providing thrilling contrast with the snappy, pulsing grooves of ‚Ghosts‘ and its gothic counterparts, album closer ‚Ravenghast‘ plainly ranks as one of the darkest and heaviest things the band have ever recorded.

“Greg came up with that title,” Nick explains. “I kept it because I like it, the feel of that word. That song’s about a battle, how do they know who’s won when it’s over? You see these great battles and then at the end, people are still fighting and getting killed, even though it’s technically over. When does someone say, ‘Hang on a minute, we’ve won!’ It’s such a shit death, to get killed in the last throes of a battle. It’s a little bit Monty Python, I suppose! Also, that song is a raging, riding-a-horse sort of song. You couldn’t really go down any other route.”

Blessed with some of his band’s strongest material yet, Nick Holmes has conjured an absorbing array of lyrical conceits and mysterious proclamations for „Obsidian“. As far as Greg Mackintosh is concerned, retaining that air of mystery is a fundamental part of PARADISE LOST‘s identity.

“Nick sometimes tries to explain what the lyrics are about, but I’d rather try to figure it out for myself,” says the guitarist. “He has this cryptic way of writing lyrics and I prefer it like that. It’s an important part of what we do.”

As they march through their fourth decade as a band, PARADISE LOST have never sounded more potent or unified in their determination to bring the darkness to life. „Obsidian“ is yet another glowering career peak, not just matching the imperious form of „The Plague Within“ and “Medusa“, but artfully outstripping it with greater depth, colour and emotional power. While many bands of their vintage have embraced the nostalgia business, PARADISE LOST remain a vibrant, vital and endlessly classy force for creative metallic good. 2020 will see the band hit the festival circuit with a vengeance, before touring „Obsidian“ in earnest next year. Like the man said, this is a good time to be in PARADISE LOST

“I remember an interview with Tom Angelripper from Sodom a long time ago, and he was talking about the cycle of doing albums and touring. He said that you never really seem to stop and then suddenly you’re a fucking old man!” Nick laughs. “It is pretty weird! But you never really get off the horse. We’ve done it for so long it would be strange to stop doing it. This is what we love doing and we’re all really happy with the new album… even if it doesn’t sound like it (laughs).” 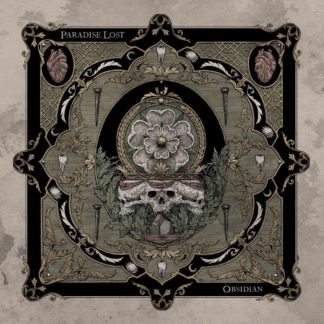