PxDx’s classic collection is finally available again! « Painter of Dead Girls » showcases grind legends PIG DESTROYER at their most primal. As a then-bassless power trio, these recordings capture the powerful and varied sounds of an envelope-pushing, borderline feral outfit behind the instruments as well as control panel.

The first half of this release was initially tracked as an equipment burn-in test during the millineal year, leading up to PxDx tracking their seminal « Prowler In The Yard » full-length. The secondary bulk of the material initially yielded their most sonically powerful recordings at the time, recorded in the late 1990’s at Oblivion Studios (PG.99, ENEMY SOIL, etc).

Rounding out this expanded edition of « Painter of Dead Girls » is the long-lost track ‘Delusional Supremacy 2K’, a raw mosh basement live recording of ‘Rejection Fetish’, along with a truly bludgeoning cover of HELMET’s ‘In The Meantime’ rounding out the existing DWARVES and STOOGES covers. With 19 blistering tracks in total all meticulously remastered by James Plotkin, this key piece of the PIG DESTROYER catalog looks and sounds better than ever.

The original album artwork by Chris Taylor has been extended with newly-created complimenting imagery, along with recently unearthed lyrics to all the PIG DESTROYER songs found on « Painter of Dead Girls », available in full for the first time ever. A photo collage is also included, containing classic photos from the era surrounding these recordings.

After many years of loose availability, PIG DESTROYER’s classic « Painter of Dead Girls » collection is finally done justice on this deluxe edition release. 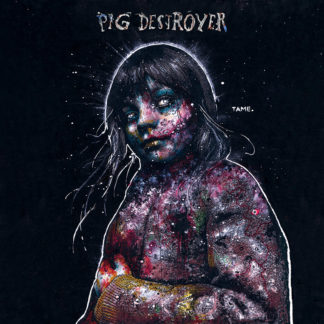