Age and a total of four full-lengths haven’t mellowed Pissed Jeans; they can still unleash a blare that will exfoliate your cochlea. Formed in Allentown, Pennsylvania, Pissed Jeans released Shallow, their first album, in 2005 on Parts Unknown Records. The band relocated to Philadelphia seven years ago, and Sub Pop released Hope for Men in 2007, and then King of Jeans in 2009. The latter was recorded by Grammy nominee Alex Newport, who also recorded their latest album, Honeys.

The process of recording four full-lengths has refined Pissed Jeans. Instead of rehashing past records or diverging in a vastly different direction their ideas and execution have become more subtly focused. The songs on Honeys are direct without being obtuse, evocative without being vague, and personal without being indulgent. They also rock like nobody’s business. Do yourself a favor and forget all the claptrap you’ve heard about other bands delivering the goods. If you want bloodthirsty, you’ve got it… Sean McGuinness makes other rock drummers look like one of those dimwit longhairs with an involuntary smile playing a bongo by himself on the lawn behind a store that sells rain sticks. With a bass that sounds like a train filled with stolen shopping carts crashing into an orchestra pit, Randy Huth doesn’t waste a note. Bradley Fry doesn’t look like a guitar hero; he looks like a nice guy who would volunteer to help you reformat the drive on your laptop. But if he looked like he sounds he’d be wearing a necklace of human heads and even his reflection would turn you to stone. Matt Korvette screams out observations on the tedium and absurdity of adulthood, delivered in a fashion similar to the way people must sound when being waterboarded. Sometimes the band sounds like hearing yourself being bashed over the head with a snow shovel. Sometimes they sound like that feeling you’d get if you dipped your arm up to the elbow in a vat of boiling grease. Sometimes they slow down and they sound like when you wake up from a nightmare you can’t quite remember. They are also catchy, not in a simpering, mewling way that your grandmother might appreciate, but in a way that would appeal to mental patients who only understand colors.

The subjects of the album Honeys are the kind of relatable, mundane, niggling things that keep you up late at night. “Bathroom Laughter” kicks off the record with ominous bass that sputters into Pissed Jeans’ most stomping track yet; the song is a narrative about being on the periphery of a nasty scene. It’s an oblique reminder of the glimpses we get into parts of other people’s lives they try to hide. “Loubs” lays out a strut and swing under an unrequited rhapsody to a woman in high heels. In the hands of most bands this would be a moronic blurt. The Jeans turn it into an uncomfortable monologue of longing. “Health Plan” is more direct: a song about the fear of going to the doctor delivered at Black Flag velocity. The record has overtures about the misery and shackles of being a responsible adult and the shame of one’s own narcissism. The music sounds like a recorded loop of a marching band being pushed down a waterslide, with added distortion. Pissed Jeans trucks in menacing songs about insecurity, and nobody has ever done it better. 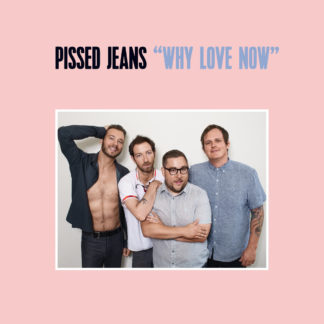