POWER TAKE OFF This Is Late – Vinyl LP (black)

POWER TAKE OFF This Is Late – Vinyl LP (black)

Don’t let the laconic warped Western album intro lull you into a false sense of serenity, be assured this record is coming for your head. And it’s bringing with it a swinging hammer of sludgy noise rock capable of deafening an entire city block. Big, hulking, spiteful noise rock that backs you into a corner and reels off paranoid rant after paranoid rant. It accuses you of crimes you hadn’t even thought to commit, nor did you wish to be privy to. It throws a thick, heavy blanket of diseased wool over your head to administer a methodical and ritualistic beating, humming the entire time. It does things that nice bands don’t… or won’t depending on your own personal politics. So who’s behind this parade of the horribles anyway? For starters, and mainly, you’re dealing with Gus Engstrom of the defunct Grids (a killing spree of a band in their own right). He is augmented in his quest for audio upheaval by Creston Spiers of Harvey Milk on trumpet (of all things), John Neff of Drive By Truckers on pedal steel, Adam Marx of Seawhores on guitar, and Matt from Moonshine on drums. Together they mount one convincing assault on your ears, all pummel and thud, with that hint of nuanced psychosis… just the right amount of crazy. If you have any Rusted Shut, Clockcleaner, Head of David, King Snake Roost, Swans, Harvey Milk or Flipper in your record collection, then you’ve found a winner here. Black vinyl in full
colour sleeve with insert and digital download coupon. Black vinyl limited to 300 copies out of 400 copies in total. 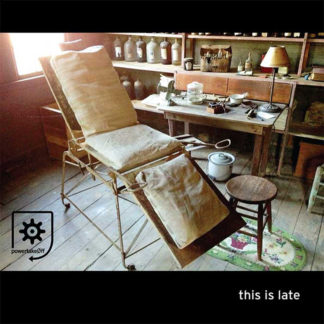