Brest, 2011. Rémi Richarme records his first album stacking some tracks randomly on his computer. Elaborated pop compositions reminding of his heroes Kevin Ayers, Pink Floyd or David Bowie plunged into a shoegaze cloud. His friends from the sound engineering school turns SATELLITE JOCKEY into a collective adventure by helping him to create a live band. The band discovers shows, life on the road and pleasures of a creative life that will get more and more intense throughout albums and shows.

Lyon, 2017. The keyboard player, singer Pauline Le Caignec (aka Kcidy) and one of the most delightful drummers in Lyon, Florian Adrien join the band to form an unusual sextet. Satellite Jockey turns into a pop orchestra that mixes violins, trumpet and rock instruments. This formation filled with multifaceted timbres is in the spotlight in the trilogy Modern Life. In it, Rémi pays tribute to the 60’s, to the baroque pop of The Zombies and to the psychedelic rock of The Beatles. Very well received by the public and fans of the genre, these three elegant opuses will lead the band to open for Damon Albarn project « The Good, The Bad And The Queen ».

November 2020. Satellite Jockey releases his new album, Le Week-End. A new stylistic evolution, nonetheless consistent, and sung in French for the first time. The band becomes a quintet and grows up, setting acoustic instruments aside to focus on synths and electric guitars. Satellite Jockey has never worn its name so well. Rémi creates a more synthetic and modern pop that drives his compositions beyond the 60’s. Californian soft rock colours blend with the hope of a nostalgic and futuristic 80’s pop sung in a surrealistic and poetic French. « Le Week-End » is a new sparkling chapter in the discography of Satellite Jockey turning them into one of the most excitingpop orchestras at the moment. 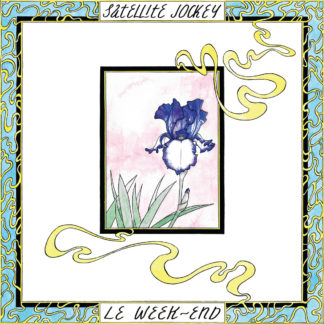