The Brighton bag-head boys are back to finally follow up their 2016 demo ‘Tory Party Prison’. Not straying far from the NWOBHC blueprint of NY83 and classic UK Oi sounds, Built For Destruction is a brick through your living room window, and it’s screaming Britain’s fucking burning mate!
Snotty southern vocals that bring to mind DEAD MANS SHADOW, scrapping with brash guitars and thumping beats that kick and punch like THE ABUSED, while keeping the raw intensity that THE INSANE captured so perfectly when the Tories were picking this country apart piece by piece the last time round.
Housed in a sleeve depicting a harsh modern reality with an image that burns into your retina, stating exactly what STATE FUNERAL are shouting about – there’s still no future. 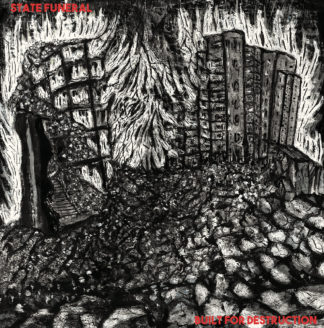