“This record is definitely looser than our last one,” says Suuns singer/guitarist Ben Shemie. “It’s not as clinical. There’s more swagger.”

You can hear this freedom flowing through the 11 tracks on Felt. It’s both a continuation and rebirth, the Montreal quartet returning to beloved local facility Breakglass Studios but this time recording themselves at their own pace, over five fertile sessions spanning several months. A simultaneous stretching out and honing in, mixed to audiophile perfection by St Vincent producer John Congleton who flew up especially from Dallas to deploy his award-winning skills in situ.

While maintaining a pleasing economy, the informality of self-production has enabled Suuns to explore bright new vistas. “Us doing it ourselves, that process was like a very receptive, limitless workshop to just try out ideas,” declares drummer Liam O’Neill.

Hence the hypnotic future-pop percolations of X-ALT or the way Watch You, Watch Me’s organic/synthetic rush builds and and builds atop elevatory rhythm and the ecstatic, Harmonia-meets-Game Boy patterns. As befits a band who cite Andy Stott and My Bloody Valentine as touchstones yet don’t sound like either, Suuns have always seamlessly blended the programmed and played. Never mere fusionists, it’s now pointless trying to decode their sonic signature as ‘dance music that rocks’ or vice versa.

Other notable developments are singer/guitarist Ben Shemie’s newfound vocal range and buoyant melodies, showcased in such wholly unexpected delights as the yearning lilt of Make It Real and sax-smoothed Peace And Love, which sincerely comes on like a post-punk Sade. There’s a previously unheard confidence to the singer and lyricist, perhaps best exemplified by centre-piece Control, where his hushed tones are complemented by a bilingual voice musing on dreams and reality, sampled from an old Montreal social art project.

Suuns are proud of their roots in Canada’s most socialist province, while sonically standing apart from Quebec’s string-swept, accordion-driven, choral chamber indie scene. “Conditions are great for musicians, but not so much if you want to be a high powered investment banker,” laughs Ben. “If I could compare Montreal to anywhere I’d say it’s kind of like Berlin, in the sense that there isn’t a huge industry, so there isn’t that much money. Plus you have to speak French if you want a career, so that stops too many people moving here. It’s gentrifying at a slower rate than other cities.”

Quebecois natives Shemie and guitarist Joseph Yarmush founded the group just over a decade ago, the latter having moved to Montreal from a nearby village. The only member not to be formally schooled in jazz, guitarist Yarmush studied photography and utilized his visual training to help realize Shemie’s novel concept for the eye-catching album artwork.

“I was at a barbecue last summer and there were balloons everywhere,” recalls the singer. “I like this idea of pressure, resistance, and pushing against something just before it brakes. And there is something strangely subversive about a finger pushing into a balloon. It seemed to fit the vibe of the record we were making. We made plaster casts of our hands, going for a non-denominational statue vibe. Joe came up with the colour scheme, the sickly green background, and shot the whole cover in an hour.”

It’s a suitably outré image for Felt, which breaks with Suuns’ earlier darkness for a more optimistic ambience. The record’s playful atmosphere is echoed by its double meaning title. “Some people might think of the material,” muses Ben. “I like that that could be misconstrued. Also it’s to have felt and not to feel – a little introspective, but that feeling’s in the past.” 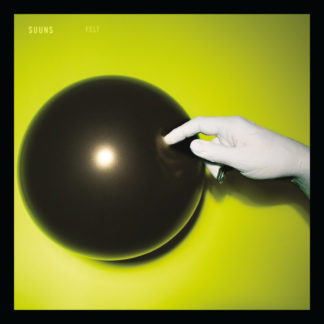