Long-time friends, and trustful party partners , the Brussels duo, Techno Thriller,
joins the Teenage Menopause Records family with a batch of slow and cranky misshapes.
During the past decade, we’ve linked them with the filthy EBM and chopped Indus-Techno they’re performing during massive lives, stabbing the dark rooms audiences.
Two albums released on both l’Entorse and the Brussels’ pioneer Unknown Precept, integrating the C12 agency, they scoured Europe, releasing some smoky tracks, for those who love cinderblocks, leather and sweat.
On the strength of this impeccable resume, they’re offering, now for Teenage Menopause, a free-reading of the Decameron: a 10 texts chronicle, by the florentine Boccace, describing the spread of the Great Plague of 1352 in his city.
While exploring the limits of new sounds, expanding electronic music, Techno Thriller looks back into their medieval influences, sharpening the blades on the literature of British authors, cutting guts on dark folk moods. The rhythms are slow, the gears are dedicated to building a dark and gloomy feeling, helped by featurings like Naomie Klaus or violinist Tamara Goukassova. 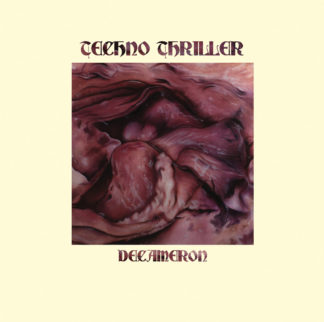