Luis Vasquez never intended for The Soft Moon to reach the public’s ears; for him, music has always been about self­-actualization rather than self-aggrandizement. Nevertheless, the bleak, hushed sounds he created years ago in his small Oakland apartment bubbled to the surface and 2010 saw his debut LP, The Soft Moon, released on Captured Tracks rise to critical acclaim. Pitchfork’s 8.1 review stated that Vasquez made “oblivion seems like an enticing prospect” and, indeed, listeners were immediately drawn into his murky musical wasteland, swathed in the moody atmospheres of jagged dark wave and wayfaring post­punk. For them, and for Vasquez, there was no turning back. The Total Decay EP and Zeros emerged soon after, and now Vasquez returns with The Soft Moon’s most introspective and focused album to date: Deeper.
Following live line­-up changes and a lull in the The Soft Moon’s constant touring schedule, the year 2013 found Luis Vasquez lost in the void. Though he fatalistically stated that 2012’s Zeros would be the last album where he was the sole songwriter, Vasquez realized that The Soft Moon has always been one man’s vision. Over time, it’s been the one place where Vasquez can express himself, totally and singularly, on his own terms.
Thus, in July of 2013, Vasquez decamped from Oakland, CA to Venice, Italy, unsure of where The Soft Moon would land. While Zeros was written and recorded between long days on the road, Deeper was begat from an almost primal urge to recoil from the world and experience total solitude. During the writing process, Vasquez pushed himself to discover the reality and nightmare of living with yourself, in entirely foreign surroundings with nothing and no one to fall back on. Stepping back and letting inspiration fall where it may, Vasquez only had one goal in mind for his third album: to pen his most emotional record yet. Between frequent visits to Berlin, Vasquez retreated to Venice’s Hate Studios, located in the mountains near electronic guru and spiritual anchor Giorgio Moroder’s hometown.
At Hate, he worked for almost a year with producer Maurizio Baggio to piece together Deeper, only completing the album in August 2014. While maintaining the stark sonic formula so indicative of The Soft Moon’s music — that bass that reeks of chorus, those unrelenting, mechanized beats, that wailing synthesizer and those eerily, angular guitar lines that worm into your ears and never leave — Baggio also worked to refine the album’s gothic palette, leaving Vasquez to concentrate more intensely on songwriting and singing than ever before:
“I’ve never worked so closely with someone before. Working with Maurizio felt right and I completely opened up to him during the entire process. I finally felt the urge to express myself more verbally with this record and I was able to focus more on songwriting rather than just experimenting with soundscapes.”
The voice of The Soft Moon has never been more clear and honest than it is on this record. With eerie, immersive tracks like the dogged “Far” and slow, beautifully melancholic “Wasting” (the first track written for Deeper), the album is a penetrating portrait of Vasquez as he wrestles thoughts of suicide, vulnerability and what it means to heal. By facing the most hopeless parts of himself without illusion and putting his past demons to bed, the creation of Deeper was an intense personal exploration of existence for Vasquez — old wounds were forcibly opened, deep anger and paranoia were manipulated into song — and he did not emerge unchanged. Deeper may have delivered Vasquez back to the waking world, but it willingly drags us further into The Soft Moon’s dark, euphonic universe once more. 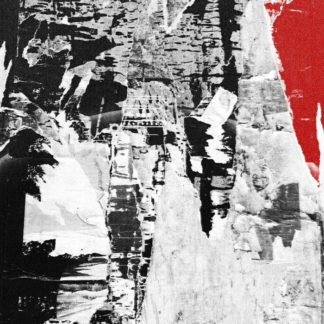