Twenty years on from the first record, 2019 sees them return with LP3, a lush, rich expansive indie-rock record, that sees the band progressing far past the constraints of those first two records to create an evolving sound that showcases some of the best music of their lives.

With guest vocalists including Rachel Goswell (Slowdive), Hayley Williams (Paramore) and Elizabeth Powell (Land of Talk), this record is definitely one to file in the ‘must-listen’ category this year!

The quietest voices can be the most durable.

American Football’s original triumph, on their 1999 self-titled debut, was to reunite two shy siblings: emo and post-rock. It was a pioneering album where lyrical clarity was obscured and complicated by the stealth musical textures surrounding it.

Like Slint’s Spiderland, or Codeine’s The White Birch, even Talk Talk’s Laughing Stock, American Football asked far more questions than it cared to answer. But there wasn’t a band around anymore to explain it, anyway. The three young men who made the album – Mike Kinsella, Steve Holmes, and Steve Lamos – split up pretty much on its release.

Fifteen years later, American Football reunited (now as a four-piece, with the addition of Nate Kinsella). They played far larger shows than in their original incarnation and recorded their long-anticipated second album, 2016’s American Football (LP2). The release was widely praised, but the band members still felt like their best work was yet to come.

‘I feel like the second album was us figuring it out,’ says Nate. ‘For me, it wasn’t quite done. I knew there was still more.’

Enter American Football (LP3). ‘We put a lot of time and a lot of energy into it,’ says Mike. ‘We were all thoughtful about what we wanted to put out there. Last time, it was figuring out how to use all of our different arms. This time, we were like – Ok we have these arms, let’s use them.’ The band used the same producer, Jason Cupp, and recorded the album at the same studio (Arc Studios in Omaha, Nebraska) as its predecessor – yet they approached it in a markedly different way. There was a determination to let the songs breathe, to trust in ideas finding their own pace. The final result is a definite, and deliberate, stretching of the band.

As a result, LP3 is less obviously tethered to the band’s past than the second album. An immediate contrast between LP3 and its two predecessors is its cover. The two previous albums featured the exterior and interior of a residence in the band’s original hometown of Urbana, Illinois (now attracting fans for pilgrimages and photo opportunities), by the photographer Chris Strong. But American Football knew that LP3 was an outside record. Instead of the familiar house, this time the cover photo (again by Strong) features open, rolling fields on Urbana’s borders. It is a sign of the album’s magnitude in sound, and of the band’s boldness in breaking away from home comforts.

American Football also joked that LP3’s genre was ‘post-house’, because of this very conscious visual break. But, in a strange way, there are links in LP3 with an actual post-house genre: shoegaze. The more exploratory members of the original British shoegaze scene were inspired by the dreamtime and circularity of house music (ambient house in particular), cherishing its sonic possibilities. That spirit drips into LP3, most obviously on ‘I Can’t Feel You’, a collaboration with Rachel Goswell of Slowdive.

The album also features Hayley Williams from Paramore on the album’s catchiest moment, ‘Uncomfortably Numb’, and Elizabeth Powell, of the Québécoise act Land Of Talk. Mike wrote lyrics in French especially for her.

LP3 is contemplative, rich, expressive, yet with a queasy undercurrent. It is heavy with expectancy, revealing its ideas slowly, eliciting the hidden stories people carry around with them. ‘I feel like my lyric writing has changed a lot over the years,’ says Mike. ‘The goal is to be conversational, maybe to state something giant and heavy, but in a very plain way. But, definitely in this record, I keep things a little more vague.’ As on the first album, the lyrics on LP3 may seem confessional and concentrated, but the more you scrutinize them, the further their meaning slinks away. Or, as Mike tellingly sings on ‘I Can’t Feel You”: I’m fluent in subtlety.

‘Somewhere along the way we moved from being a reunion band to just being a band,’ says Steve Holmes. American Football is now a bona fide ongoing focus, and they are making some of the best music of their lives. American Football (LP3) stands with two other rare reunion successes – Slowdive and My Bloody Valentine’s mbv – as a fine example of how a band refinding one another can augment, rather than taint, their legacy.

‘I think that there are those albums, or the music that you heard when you were younger, and they imprint on you,’ says Nate. ‘And no matter where you go, or what you do they’re always there.’ He is talking of Steve Reich – an early and ongoing influence on American Football – but he might as well be reflecting what is said of his own band, and the ardent following they inspire. American Football stands as an enduring symbol of elusive emotional landscapes, where introspection can be as dramatic as confrontation. 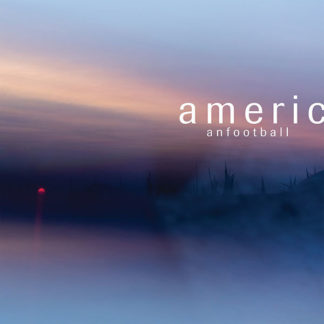