BUILDINGS You Are Not One Of Us – Vinyl LP (black)

BUILDINGS You Are Not One Of Us – Vinyl LP (black)

Formed in 2006, BUILDINGS is a three piece from Minneapolis. Their music is loud, aggressive, and dynamic. Melt Cry Sleep was the band’s 2nd full-length, and the follow up to 2008’s self-released Braille Animal (recently reissued on doubleplusgood). Engineer, Jacques Waite (off with their heads, motion city soundtrack) and mastering engineer Bob Weston (shellac) perfectly reigned in the band’s furious energy, allowing the 10 tightly wound tracks on Melt Cry Sleep room to breathe in contrast to their raw & visceral live sets.

Now the band will release its highly anticipated 3rd LP « You are not one of us » recorded in world famous Pachyderm Studios. Engineered by Nick Tveitbakk and mastered by Adam Tucker at Singature Tone Recordings, these 11 tracks show Buildings maturing into a band that can not only produce gut wrenching, noise but at the same time blur the lines that divide many rock sub-genres – punk, noise rock, post hardcore all come to mind – and end up with a sound that is dynamic, raw and absolutely massive. Nothing is held back in terms of energy and aggression, but its executed in a way that is entirely organic. Something that you can bang your head and sing along to.

New Buildings album is being released through Antena Krzyku in Europe and Gilead Media in the States. 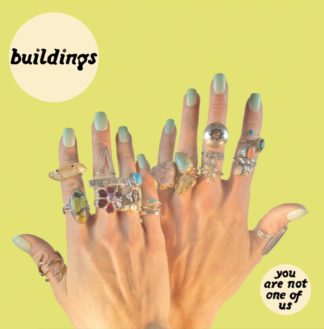