On their 3rd LP Tokyo’s Coffins are firmly established as the underground’s leading purveyors of neanderthal paced doomed death metal. Previous LPs « The Other Side Of Blasphemy » and « Mortuary In Darkness » introduced Coffins’ black tar dirge to an audience eager for slowppressive maniac riffs and songs dragged forth like the arms of a lumbering ape. Derivative and true rather then progressive and new, with an effectiveness unmatched in today’s underground. Immediately battering the listener with the opening sledgehammer ‘Under The Stench’ the album crawls ever forward through the catchiest Coffins tracks ever, like the Frost at 16 RPM narcoplunder of ‘Cadaver Blood’. The patented brick heavy guitar tone remains and the band has added some additional solos and high vocal screams, hinted at on 2006’s « The Other Side… » LP. Rather than toy with forced « evolution » Coffins has instead sharpened and honed its devolved sound further in its primitive singlemindedness. 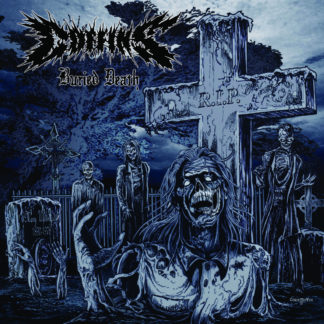