The rebirth of Earth resulted in the band signing with Southern Lord Recordings and releasing the essential “Hex” album circa 2005. Their next step was monumental.
Working alongside Hex producer Randall Dunn, the band entered AVAST! studios (where Earth2 was recorded) and began laying down what was to become one of the bands finest moments of their existence. The mainstay core of Dylan Carlson & Adrienne Davies collaborated and wrote material with Steve Moore, Don McGreevy, and legendary guitarist Bill Frissell. The final result of their hard work was: “The Bees Made Honey In The Lion’s Skull”. The musical direction was more focused than Hex with the band moving into more of a rock and american Gospel oriented and improvisatory direction framed by a truly psychedelic production. It remains the groups most successful album and many tracks are still performed by Earth live. The audio was specifically mastered for vinyl and the LP lacquers were cut by Bob Weston (Shellac).
The vinyl version of this album contains the exclusive bonus track: “Junkyard Priest” (featuring Milky Burgess on slide guitar)
This 2018 pressing is housed in a beautiful “old style” Stoughton gatefold jacket.
“From Strength, sweetness. From darkness, Light, The bees made honey in the Lion’s Skull” 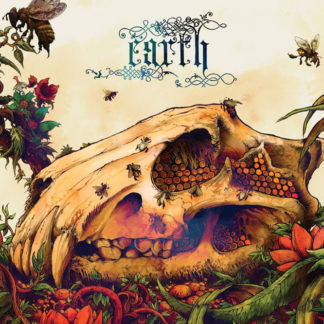