Continuing its exploration of improvised music as a haunting ritual at the confines of the Martian territories of noise, drone and ambient, FOUDRE!, the supergroup composed of Frédéric D. Oberland (Oiseaux-Tempête, Le Réveil des Tropiques, FareWell Poetry), Romain Barbot (Saåad), Paul Régimbeau (Mondkopf, Extreme Precautions, Autrenoir) and Grégory Buffier (Autrenoir, Mätisse) invites us to take part in its Future Sabbath. Fifth album of the group, this project stems from a desire to probe the invisible forces that live within us, through a ceremony that brings together occult sciences, forgotten landscapes and the fever of the unconscious. Created around the recording of one of their live shows at Instants Chavirés (Montreuil, France), overdubbed by the band then produced by their dedicated sound engineer Camille Jamain, it is also an invitation to a dance, a secret dance, embodied by a powerful breath of life, an electronic discharge against the temptation of a toxic cynicism.

Gathering regularly since their debut in 2015, FOUDRE! brings together electronic and acoustic instruments, merging incarnate and disembodied souls, past and snippets of a post-apocalyptic future. After the ghostly and hovering EARTH (2017) then the wild and telluric KAMI神 (2018), Future Sabbath travels even further into the tangle of genres and textures, offering a luxuriant palette of moods and emotions. Passing through the tracks with evocative titles, mystical symbols and spiritual signs set this Sabbath of machine sorcerers ablaze.

“Liberation of the Mystics” opens the psychedelic banquet with a buzzing drone punctuated by crackles, bewitching synth melodies and metallic textures slashing the wall of sound with blinding lightning. A brooding sound storm that feeds on several layers and undulates between density and sublime bareness. “Imaginatio Vera” refers to Gustav Jung’s psychological method of confronting one’s unconscious in order to give a sensitive form to the images emanating from it. A way of pushing back the limits of what is considered real, opening the gaze to the dreamlike. Undeniably cinematographic, the piece constructs mental landscapes, terrains of all possibilities where the irrational navigates freely. Saxophone and baglama parts, almost veiled, as if heard from a distance, tickle the electronic magma. “Black Swan Theory” transports us into an infernal spiral, pressing the pace and increasing the heartbeat. In this percussive explosion, this blackened trance, FOUDRE! captures the essence of the Black Swan Theory, according to which an unforeseen event with exceptional consequences upsets the rational predictions that govern the world. It is the piece that fits most into the anxiety we share today, in the face of the repeated disasters that are occurring and will occur, but also the control systems that result from them. “Danse Secrète” closes the dusk gathering; it is the last invocation before the rising of a new sun. The piece is perforated by beams of light, and combines echoes of celestial voices, analog machines and bells for a grandiose finale.

To give substance to this Future Sabbath, FOUDRE! called upon French visual artist and filmmaker Faye Formisano, whose enigmatic drawings adorn the album cover. From her series “La Danse Secrète”, the works form a tangle of androgynous bodies that seem to invoke a mystical force, arms raised in an ecstatic choreography. From these uprisings, inspired by the trance – like crowds, the representations of the damned or certain ritual dances, emerges this Danse Secrète as the expression of an inner dance. The artist, currently in residence at Le Fresnoy, presented her first short film Insemnopedy I: the Dream of Victor F last year at the Etrange Festival. 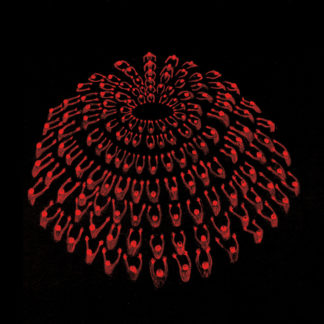