After five secluded years of death worship and occult study, GRINNING DEATH’S HEAD calls forth Blood War. A mature work of painstaking devotion, it presents nature as an evil force propelling life toward a violent demise.

Where past recordings assaulted with crude provocation, Blood War deploys a newfound clarity that builds upon previous achievements. The basement haze of years past is stripped away, revealing spatial chasms that resound with sinister majesty. With the addition of conspirators M. McCoy and I. Jacyszyn, J. Wood commands with a fierce compositional focus. Despite the minimal instrumentation, the songs achieve a heightened narrative structure and march unwaveringly through pillaged landscapes toward mankind’s deserved end.

Recorded in New York City and in Sugar Hill, Georgia and mastered by Will Killingsworth at Dead Air Studios, Blood War is a transcendent display of superiority that answers the call to death. 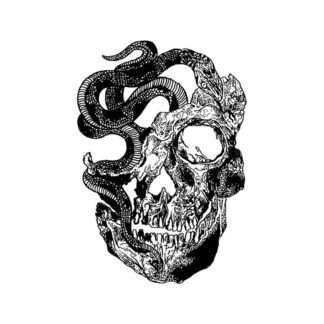