You know you’re onto something special when you encounter a band that not only hits hard but also packs heartfelt, palpable emotion behind every punch. Embracing an ethos centered around anti-obsession, personal growth and self-awareness, Harm’s Way’s metallic hardcore has won them fans on four continents, and their reputation for delivering blistering sets cannot be overstated. Having grown with each subsequent release, Posthuman, their fourth full-length – and Metal Blade debut – is a devastating addition to their catalog. “We’ve always stayed true to who we are and allowed the songwriting process to take shape organically from record to record, and as the band has progressed our sound has become more refined with metal and industrial influences,” states drummer Chris Mills, while guitarist Bo Lueders succinctly sums up what people can expect when they first spin the record: “To a Harm’s Way fan, I would describe Posthuman as a blend of Isolation (2011) and Rust (2015), but it’s sonically way more insane. To anyone else, I would simply say it’s full on heavy and full on aggression.”

It is perhaps surprising, given their vitality, that Harm’s Way was initially a side project for members of Chicago hardcore crew Few And The Proud, and actually started off as something of a joke. In 2007, a year after the unit’s inception, they dropped their first 7”, Imprisoned, and in 2008 they unleashed their self-titled 7”, at that stage already showing dramatic signs of growth beyond the power violence sound characterizing their earliest material. It was at this juncture the members realized that they had something that had deeper potential – and meaning – than whatever they first envisaged, and as they began to draw in fans everyone started to take things far more seriously. Having endured some substantial lineup changes over the years, Mills, Lueders and vocalist James Pligge have remained the beating heart and driving force in the band, and, while their following has grown with every release, Rust was a true turning point. “Rust is still a record that we are incredibly proud of, and in many ways it helped us to get to where we are today, since the response to that record was essentially what made us decide to make a full-time commitment to this band,” explains Mills. “It opened up many doors for us and allowed us to connect with people in ways we weren’t really expecting, and we toured that record relentlessly.” With bassist Casey Soyk and second guitarist Nick Gauthier coming into the band’s ranks prior to work commencing on Posthuman, the quintet were never going to merely recycle the record that had won the hearts of so many people, determined to keep pushing forward and only making the music they want to. That they realized their goal of crafting something even heavier and more aggressive is evident from the get go, opener “Human Carrying Capacity” a titanic force in its own right, thunderous anti-anthems “Sink”, “Become A Machine” and “Unreality” every bit as powerful. However, the band don’t rely on sheer, unwavering, brute force; industrial elements frequently imbuing the songs with haunting atmospheres, and contributions from their newest members bestowing “Temptation” and “The Gift” with a pronounced and affecting eeriness. ““Temptation” was a brainchild of Chris and Nick that really came together in the studio,” Lueders says. “While “The Gift” was the work of Casey in collaboration with our producer Will Putney (The Acacia Strain/The Amity Affliction). We flew him out to the studio for a couple of days and they produced one of my favorite songs on the record. Both that song and “Temptation” are just following the mantra of doing exactly whatever we want with our project.”

The title, Posthuman, aptly summarizes the themes of the record, reflecting a sense of not feeling like a part of the world anymore, whether that be politically, socially, ethically, or emotionally. “It very much pulls from ideas of transcendence, progression, and resilience”, Mills elaborates, “and it’s very much a push back on traditional ideas of the self and self-actualization. Posthuman to us is about progressing above and beyond the confines of what is considered human, in the physical, psychological, and categorical sense.” Across the record this is borne out by Pligge’s lyrics, which can be understood as a critique of human behavior and the human condition as a whole, given the absurd and constructed nature of reality in contemporary society. “Human Carrying Capacity” comments on overpopulation, and the consequences to both the environment and health due to such high rates of production and consumption, while “Become A Machine” sets its sights on our technological obsessions. “It’s about how over-dependent society has become on technology and how such technological advancements, when placed in the wrong hands, can be destructive and catastrophic. The song also looks to critique whether all technology is really as beneficial as we might think,” Pligge explains, while on weighty closer “Dead Space” he takes a grounded, insightful approach to philosophical and existential matters that in varying ways affect all human beings. “It’s essentially about how we go through life experiencing pain, suffering, trauma and many other negative emotions, and it asks why? For what reasons? The song hones in on the realization that we will all pass away into what I believe to be the end of our own consciousness, or any other theoretical physical space. It highlights the idea that our purpose in life unfortunately means nothing, and we are just a cosmic mistake that will eventually be forgotten. It’s essentially a refutation of the idea that there is some grand design and greater purpose for being here on Earth.”

With producer Putney overseeing the tracking at Graphic Nature Audio in Belleville, New Jersey, Posthuman came together easily and fluidly. Having three weeks to track it – the longest they have ever spent on a single full-length – was definitely beneficial. “We spent the first three days there doing preproduction and refining the songs to be the best possible versions of themselves,” says Mills. “The amount of time we had in creating this record meant we were able to experiment and not have to rush with any aspect of it, and I feel it shows in the end product.” An intense touring campaign will see the band taking the songs into venues around the world throughout 2018 [and 2019?], the quintet at their best when unleashed on a stage. Having played not only in North America and Europe but Australia, Japan, and other parts of Southeast Asia – and touring with heavy hitters such as Converge, Soulfly, Every Time I Die and At The Gates, plus playing France’s legendary Hellfest in 2016 – the Chicagoans are nothing but humble about their achievements. “We never thought we’d have the opportunity to see the places that we have through the band, but we’ve been afforded that privilege through our hard work and the growth in our fan base. To now also be a part of Metal Blade, a label with such rich history in the world of aggressive music, is truly an honor,” Mills states. Likewise, when it comes to the future they remain typically grounded yet characteristically passionate. “I don’t know if we have ever had a goal with the band, aside from making heavy music,” Lueders says. “I think ultimately my personal goal is what has characterized our band over the last ten years: I want to tour the Earth and make heavy, aggressive music with my best friends, because so far it’s been a pleasure every day.” 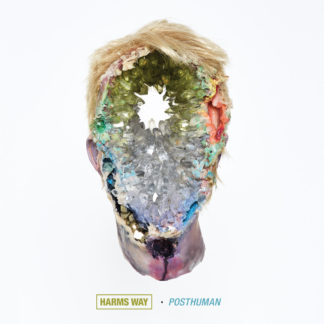