Hexvessel’s fan-favorite album from 2012, No Holier Temple, gets a luxury 10-year anniversary reissue via Svart Records! No Holier Temple was Psychedelic Forest Folk band Hexvessel’s second full-length album, released to critical acclaim, cult status and some of their biggest sales figures to date. The Finnish “mushroom-devouring pixies” follow up to 2011’s critically acclaimed debut album, Dawnbearer, was described by Roadburn Festival as “a passionate, urgent and gorgeously strange musical spell.” Hexvessel’s break-through album No Holier Temple reached new heights for the band with two Emma Gala (Finnish Grammy Awards) nominations. No Holier Tample also won two Femma awards, which is the Alternative Finnish Grammy Awards. Hexvessel played the prestigious Roadburn Festival in The Netherlands for the first time that year in the church venue of Het Patronaat. The festival sold out in 7 minutes. No Holier Temple also landed in the Main Finnish Charts at #20 and in Alternative charts at #7. No Holier Temple fuses the acoustic 70s folk vibe of its predecessor into a more psychedelic, electric, doom-folk sound with Manzarek-like keys, screeching rhythmic Velvet Underground violins, Miles Davis trumpets and hypnotic freakouts. Weaving the uncanny songs together are the narrative vocals of Mat McNerney, who on this album has matured into the bastard child of Burke Shelley, young Jon Anderson and Paul Simon. Inspired by the progressive, spaced-out haze of bands like Amon Düül II, Van Der Graaf Generator and Ultimate Spinach, whose song “Your Head Is Reeling” they cover with religious abandon. Their sound now expands outward from their eerie, signature, ritual-esque intros into a genre-twisting cauldron of otherworldly rock and the late-night, dreamy spoken-word of artists such as Jim Morrison (An American Prayer) and Ken Nordine. The front cover is by the artist Bastian Kalous and represents the reverence to the native forest and nature that Hexvessel raised awareness and preservation of. The themes of the album, as explained by McNerney “are inspired by the work of great men like ScottishAmerican naturalist and preservationist John Muir and more recent radical environmental advocates Dave Foreman and Howie Wolke,”. No Holier Temple was a bold step into the wilderness for Hexvessel, carving their own distinct path. Follow and become initiated.

Side A : Heaven And Earth Magic / Woods To Conjure / Wilderness Is! / A Letter In Birch Bark
Side B : Elegy To Goyahkla / His Portal Tomb / Are You Coniferous?
Side C : Sacred Marriage / Dues To The Dolmen
Side D : Unseen Sun / Your Head Is Reeling 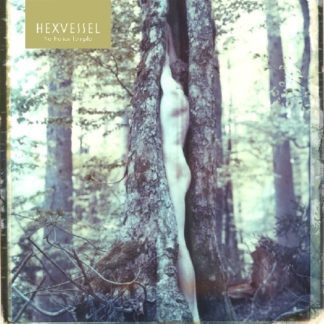