“’Blues rock’ has been invented over and over again and Nebula are the persistent ‘stoner’ gale though ‘Apollo’ is only their fourth album in seven years. Labelled under many old styles, Nebula’s blasts from the past yet offer more fresh new party crackers.
The Nebula sound is drenched in oily sonics dug up from Muddy Waters and on ‘Apollo’, Nebula don’t shy away from resemblances among others to Rory Gallagher and Slade. Grunge parents and their children will love this album to bits.
One of 2006’s highlights will prove to be this Nebula track called ‘Future Days’ from this truly intoxicating ‘Apollo’ album. Though ‘Apollo’ is fairly consistent, a few tracks stand out because of the immediate appeal – to be specific that’s the 10/10 note down in my book. ‘Apollo’ is in fact the epitome of retro but the album leaves no room for any further discussions of the past.
‘Future Days’ features the bleating of sheep melted in to some of the most gorgeous guitar licks of today. Spoiling you with superlatives with good reason; ‘Apollo’ includes both the method for an off-licence brain surgery as well as the means for a fully registered permit to go ape. You just won’t get an easier lobotomy than from ‘Apollo’.
The music may go back 30 years or more but through some magical mystery resurfaces with excellence. If the demand is for blues, rock, stoner or whatever comes off strings, skins and from throats, then Nebula probably play that type of joyful sleaze better than any other band these days.” – Maarten Schiethart 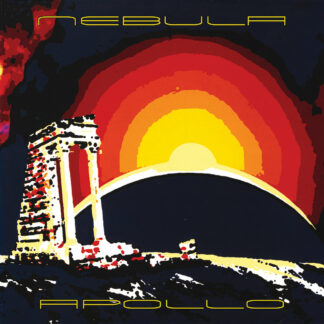