Balancing traditionally timeless grit with 21st century gusto, Judiciary hammer out hardcore grooves at breakneck thrash speeds. The Texas quintet—Jake Collinson [vocals], Kyle Calfin [bass], Austin Looney [drums], Jimmy LaDue [guitar], and Israel Garza [guitar]—wield a searing signature style unlike anything in heavy music. With calculated intensity, it bludgeons without compromise, draws back for a breath, and strikes again even harder. Piling up millions of streams and inciting the applause of Stereogum, Revolver, and more, the group perfects this incendiary hybrid of metal and hardcore on their 2023 second full-length LP, Flesh + Blood [Closed Casket Activities].

“It’s a mashup of old school heavy metal with contemporary energy,” says Kyle. “We didn’t just change anything for the sake of change—we’ve elevated everything in every way.”

Grinding full force since 2013, the band unleashed the EP The Axis of Equality in 2016, a split EP with Mortality Rate in 2017, and finally, their first full-length record Surface Noise with Closed Casket Actitives in 2019. Of the latter, Revolver exclaimed, “More so than many other bands in their orbit, the quintet excels at writing riffs that hang on through any one track without faltering,” while Stereogum raved, “It fucking rips.” Beyond highlights such as “Stronger Than Though” [feat. Bryan Garris of Knocked Loose] and “Temple” [feat. Brody King of God’s Hate], their standout single “Social Crusade” signaled success for what the band had set out to accomplish with their first LP. Along the way, they also shared stages with a wide variety of bands, including Vein, Power Trip, The Acacia Strain, Exhumed, and Gatecreeper, to name a few.

Citing influences such as Slayer’s God Hates Us All and Chimaira’s The Impossibility of Reason as well as “a ton of Machine Head,” their vision crystallized in 2021. They recorded what would become Flesh + Blood with producer Arthur Rizk [Power Trip, Cavalera Conspiracy] in August of 2021 before Will Putney [Body Count, Vein] handled mixing and mastering.

The collaboration with Arthur proved significant on multiple levels. “Riley Gale [Power Trip] was a huge advocate of us doing a full record with Arthur, so finally being able to do so was an important full-circle moment for us all,” says Kyle. “Arthur really understands heavy music and writes in a way for his bands [Sumerlands, Cold World, etc.] that we all respect. Will makes everything sound massive in every record he works on. We’re super excited for everyone to hear what happens when you combine the two.”

The record snaps into high gear with the one-two punch of “Flesh” and “Blood.” This back-to-back assault evokes the power of their metallic alchemy. “The pairing of ‘Flesh’ and ‘Blood’ really defines every element of the record,” he goes on. “There’s a dystopian feeling, which bottoms out immediately on the first guitar riff of ‘Flesh’. Then it goes straight into the ass beater ‘Blood’.”

The first single “Engulfed” explodes with the squeal of pinch harmonics above a double bass barrage. The gut-punch gives way to a head-spinning solo as the chant, “Shattered glass sound,” rings out. “It’s a super fun song with cool guitar leads,” notes Kyle. “It came a long way, and it’s one of the most cohesive tracks now.”

On “Paradigm Piercer,” clean guitar cuts through a hazy hum only to lose ground to a trudging wall of distortion in a powerful push-and-pull. Everything culminates with “Eschatos Hemera,” which translates to “last days.” The track’s ominous guitars soundtrack a cathartic finale tailormade for the end of existence as unexpected clean vocals wail. “We pushed it further and turned everything up even more extreme with this one,” he elaborates. “Some version of the name ‘Eschatos Hemera’ is all over religious texts and essentially refers to the apocalypse. With this record, we wanted to create our own apocalyptic world. ‘Eschatos Hemera’ is the climax of that apocalypse.”

In the end, Judiciary rule a world of their own now and forever. “We want this music to take you to the world that we’ve built with it,” Kyle leaves off. “To feel it, visualize it, see it how we see it—to us, there would be nothing better.” 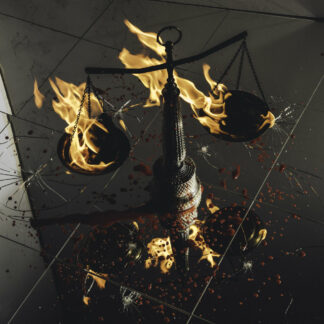