Pressing info : 2019 repress on black vinyl LP. Wonderful Rainbow deluxe issue first time with full artwork as initially conceived by Lightning Bolt. The LP jacket itself is never before released artwork created at the time of the album. All artwork has been created by Brian Chippendale.

Legendary band Lightning Bolt’s Wonderful Rainbow is one of the most quintessential albums to come from the underground in the last 20 years. Included in lists like Pitchfork’s « 200 top albums of the 2000s » and the book 1001 Albums You Must Hear Before You Die, Lightning Bolt’s seminal record solidified their place as pillars of the underground community. Wonderful Rainbow saw the duo of Brian Chippendale (drums/vocals) and Brian Gibson (bass) being compared to the likes of Slayer, Ornette Coleman, and early Boredoms, and captured the bristling, immeasurable energy of their mythical live shows, which continue to astonish audiences today. The album’s now iconic artwork (drawn by Chippendale) mirrors the music’s curious and exhilarating blend of chaos, noise, intense beauty, and childlike wonderment. Lightning Bolt paved the way for countless artists who followed them, cracking the noise-rock and underground scenes wide open with an album as frenetic and violent as it is overflowing with joyful abandon. 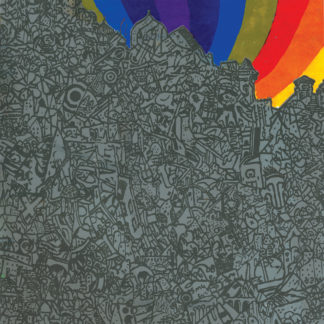