Six bass players? Is this a joke? What IS the deal with these ceaseless idiots? Can’t they just settle in and be happy with ONE line up?

I suppose it figures considering how many goddam bass players they’ve had up until this point.

According to King Buzzo, “More is more! As hard as it might be to believe, all of these bass players contribute something of their own to Basses Loaded which gives the whole album a good kick right in it’s big fat ass.”

Recording with Krist Novoselic is something that should have happened a long time ago but rumor has it that he’s been busy doing things like playing bass with Paul McCartney and getting his ass inducted into the Rock and Roll Hall of Fame. It’s hard to believe he even bothered with this! Ha!

Butthole Surfer and Honky member Jeff Pinkus played on the Melvins’ album Hold it In and has done shit load of touring with the boys in the last few years.

Trevor Dunn recorded the Freak Puke album with these guys as well as played bass on the Melvins’ record setting US tour where they played all 50 states plus DC in 51 days. This was also released as a tour DVD last year entitled Across the USA in 51 Days, the Movie!

Jared Warren is a Melvins’ veteran having recorded the Senile Animal, Nude with Boots and The Bride Screamed Murder albums as well as the Bulls and the Bees EP.
Dale Crover is usually the Melvins drummer but slid over to bass when they brought back original drummer Mike Dillard for the Tres Cabrones album (this line-up was called Melvins 1983).

Steve McDonald has been in Redd Kross since he was 11 and he’s a founding member of Los Angeles hardcore band OFF! plus he’s got REALLY good stories about the “rock scene” in Los Angeles! The Melvins have a shit load of touring planned with Steven this year so this whole thing is a really big deal. 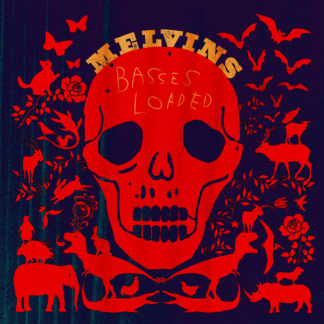