THE THIRD STUDIO ALBUM FROM ONE OF THE PREMIERE NORWEGIAN BLACK METAL ACTS OF RECENT TIMES, FEATURING GUEST APPEARANCES FROM DIMMU BORGIR AND 1349 MEMBERS

Mork was created by Thomas Eriksen in the town of Halden in Norway during 2004. Mork was primarily a side-project for Eriksen from inception until the debut album release in 2013, & since then the band has rightly earned their accolade as one of the top Norwegian black metal acts of recent years, receiving strong endorsements from their peers.

‘Eremittens Dal’ is Mork’s third album, and stands as a tribute to the spirit of old-school Norwegian black metal. The album is primarily inspired by the works of Darkthrone & Burzum, complete with raw production & ice-cold riffs, but with its own dynamic and atmospheric twist; stepping effortlessly between the ferocious and the melancholy. The album covers themes of hate, death, seclusion and misanthropy, both lyrically and in the way that a one-man-band makes music in solitude, perfectly fitting of the title, translated as ‘Valley of the hermit’. The suitably grim pencil cover art comes courtesy of Jannicke Wiese-Hansen, who famously made artwork for early Burzum and Satyricon releases.

Having featured guest vocals from none other than Darkthrone’s Nocturno Culto on their previous album, ‘Eremittens Dal’ includes special guest appearances from Dimmu Borgir’s Silenoz who contributes vocals on two tracks, plus additional bass parts from 1349’s Seidemann. ‘Eremittens Dal’ was recorded at Rottehullet Studio in Halden, Norway. It was mixed by Freddy Holm at Kleiva Studio & mastered at Enormous Door in the US (Darkthrone’s The Underground Resistance & Arctic Thunder).

Though Mork is essentially a solo-project, a full live line-up has been established, where the band has already played throughout Europe and parts of North America, plus famously a recent show in Izmir, Turkey, following in the footsteps of the legendary Mayhem.

“Mork caught my attention a couple of years ago and I was immediately drawn to the atmospheric and reclusive soundscapes, enticed by the desolate and solitary approach – true to the old Norwegian Black Metal ways. It was as if I was thrown back in time. So when I got asked to add vocals on two tracks I didn’t hesitate to comply, I just instantly knew I was meant to have a part in it!” Silenoz (Dimmu Borgir)

“Many have tried, many have failed. Mork nails it” Nocturno Culto (Darkthrone) 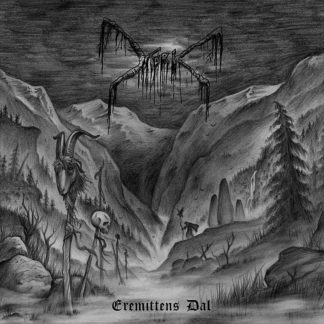