Nailbomb was a side project by Sepultura’s Max Cavalera and producer/engineer Alex Newport in the mid-1990s. Point Blank is their only studio album, originally released in 1994 by Roadrunner Records. The album combines the thrash-metal fury of Sepultura with the robotic industrial clangor of Fudge Tunnel.

Nearly the entire Sepultura lineup is present on the guest list – both Andreas Kisser and Igor Cavalera are credited. Also Dino Cazares of Fear Factory and Ritchie Bujnowski from Wicked Death are featured on the album. The first track « Wasting Away », appears in the 1995 film To Die For. « Exploitation » is a cover originally by the English crust punk band Doom.

Relentless grinding riffs, and an industrial-strength percussive roar, the lyrics are uniformly nihilistic and the album is riddled with left-field samples that add a disorienting, dehumanizing texture. This is an ass-kicking album, that is full-on malevolent from the get-go. Point Blank is abrasive, in your face, and loud as hell with the lid off. 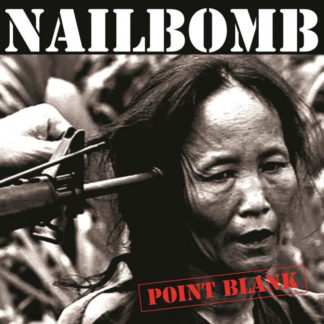