“While punk music was our first love, pop music has become our fixation. Throughout the making of Palberta5000, we were focused on making music that people could not only sing along to but get stuck in their heads… that and attempting to make songs longer than 50 seconds…While our melodies have gotten more melodic and our singing less harsh, we haven’t strayed too far from who Palberta is, defiantly Palberta. And no one will shape us to be otherwise.” – Palberta

Two years removed from their triumphant 2018 LP Roach Going Down, which Pitchfork described as « a leap to another level » from the beloved NYC trio, Palberta are returning to deliver their clear-eyed fifth album, Palberta5000, a collection of adventurous, hyper-melodic songs that will excite their devoted following while welcoming new fans along for the ride. While long heralded as one of the most original and idiosyncratic bands in the East Coast DIY scene, earning regular comparisons to ESG, Captain Beefheart (Pitchfork) and CAN (FADER), on Palberta5000, Ani Ivry-Block, Lily Konigsberg, and Nina Ryser max out traditional pop forms—creating hits that catch in listeners’ brains while blowing the genre out into lush, kinetic extensions that morph into absurdist outros and haptic breakdowns—to create their own hardcore style of popular music. In doing so, they have made their most accessible album by a far measure—one that is bursting at the seams with vocal hooks and exuberant playing.

The first single, “Before I Got Here,” features a charging and emotionally chaotic intro verse—building to the frantic ear-worm lyrics “if you want to talk about it / then we can talk about it / I’m just so sick about it / don’t blame me”—that stops on a dime for a three-part vocal harmony breakdown, then seamlessly rushes off again. The song conveys the raw emotions that can accompany letting someone into your life before pumping the brakes and settling into a hypnotic krout-surf outro, garnished with horns from Matt Norman that reinforce and swell the melody.

“High speed, fast track, slow prose.” Palberta5000 punctuates its jagged edges with ebullient cries of “Hey!” and rounds its corners with angelic harmonies, while marching-band snares propel the album forward with a metronomic intensity that belies the sixteen tracks’ diverse time signatures and fevered pacing. Hardcore fans will recognize the band’s live staple “Corner Store,” whose heart-melting harmonies layer over irresistible croons of “I meet you anywhere you are”—a promise kept by an album that meets listeners where they are. “Big Bad Want,” another notable piece from the band’s pre-COVID sets, is Palberta’s version of fast punk, with a zig-zag bassline and a call-and-response nursery-rhyme chorus that returns for the song’s outro, stretching defiantly past the three-minute mark with the repeated mantra “Yeah (yeah) I can’t pretend what I want.”

Although Palberta have toyed with repetition and longer song structures on past recordings, Palberta5000 masterfully digs into a groove and transforms repeated phrases with a cult-like frenzy to hypnotic effect. On their slow waltz, “The Way That You Do,” and the enchanting “Red Antz,” Palberta bring the tempo down for lavish slow jams only hinted at on past efforts like Bye Bye Berta’s “Why Didn’t I.” Such tracks add a variation to Palberta5000’s well thought-out song cycle and contribute to a full album experience that will leave listeners breathless. In the fitful sleeper “Cow,” Palberta sing, “I will be there with my hand on your chest / I feel your rumbling internal mess.” In a time of exhausting disappointment, Palberta5000 is an album that sees our internal and external messes, openly displays its fragile places, and acts as an energetic complement to the movement for positive change. 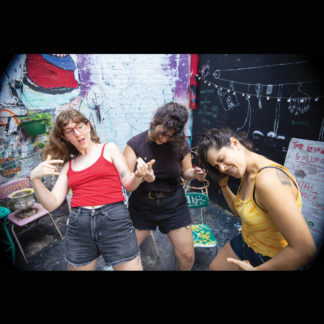