THE BODY I Shall Die Here – Vinyl LP (black)

THE BODY I Shall Die Here – Vinyl LP (black)

I Shall Die Here is the fourth full-length album by The Body. Sharing their moribund vision for I Shall Die Here with Bobby Krlic (aka The Haxan Cloak), the tried and true sound of The Body is cut to pieces, mutilated by process and re-animated in a spectral state by the newly minted partnership.

The Body’s brutal musical approach, engraved by drummer Lee Buford’s colossal beats and Chip King’s mad howl and bass-bladed guitar dirge, becomes something even more terrifying with Krlic’s post-mortem ambiences serving as both baseline and outer limit. I Shall Die Here sonically serrates the remains of metal’s already unidentifiable corpse and splays it amid tormented voices in shadow.

Formed in Little Rock, Arkansas in 1999, The Body soon relocated to Providence, Rhode Island. The duo remained in Providence for a decade before moving west to their current home of Portland, Oregon. A handful of precursor releases readied the band for seasoned explorations across their debut self-titled album (Moganano, 2003) and on the widely-acclaimed All the Waters of the Earth Turn to Blood (At A Loss, 2011).

The Body’s curtailing of formal classification figured heavily on All the Waters. The album’s employment of the Assembly of Light Choir’s classical chorales alongside more industrial music techniques such as vocal sampling and drum programming in turn prompted RVNG to inquire with King and Buford which darker corners of the electronic universe they were presumably interested in exploring.

The earnestly experimental undertaking of I Shall Die Here is expertly aided by Seth Manchester and Keith Souza, The Body’s longstanding engineers and creative collaborators, and noted producer Krlic. Krlic’s own work as The Haxan Cloak struck a similarly despairing chord to The Body with last year’s celebrated Excavation (Tri Angle, 2013), itself a minimalist evocation of the afterlife.

I Shall Die Here shares similar nether space with the morbidly deviating darkness of Excavation, but remains sculpturally frozen in a sort of earthen purgatory. On album opener « To Carry the Seeds of Death Within Me », a dramatic pause partitions the seismic caterwauling and savage whump of the first half from the ambient, suffocating ripple of the second. From there, the dimensional doom marches on in procession, ceaselessly alternating between shape and shadow.

« Alone All the Way » is an iconic take from I Shall Die Here. An anonymous, distorted voice ruminates on the moral dilemma of suicide, (to paraphrase: escape from suffering, perhaps, but only by unleashing it on those close), before an oscillating snare / crash pattern enters stage augmented by overdriven guitar and fully throttled rage. Dispatches of electronic color complexly fill in the gaps before Buford’s beat transitions into a tribal, Burundi-esque rumble.

King’s strychnine scream serves less as a lyrical conduit and more as a caustic, flammable element to the overall fabric on « The Night Knows No Dawn », the harsh, droning midpoint of the album. « Hail to Thee, Everlasting Pain » follows, wherein the album’s earlier unbridled bleakness is reignited by guest vocalist Ben Eberle and then tweaked in a masterful combination of pounding doom and techno drum patterns.

Nine-minute closer « Darkness Surrounds Us » sends off I Shall Die Here with the prophetic event horizon. A metered stanza of spoken lines booms in hollow space, introducing a passage of thin, searing textures of strings and mutating bass rhythms. Where Buford’s drums are triggered, they pose the final stages of the album’s bitter resolve. The guitar, so indistinguishable here from over-gained bass, proceeds with King’s vocal into inevitable oblivion.

According to the band themselves, they sought to create something wholly experimental with I Shall Die Here. In the course of its creation and recreation, they have attained that rare artistic goal: an album with few precedents and a paradigm shift richly realized. Bobby Krlic’s downcast electronic visions laces seamlessly into The Body’s already volatile mix of fissured doom metal and fused verbal spaces. The onset of a new music emerges with I Shall Die Here, and in its shifts, shadows, and reeling voices, the darkest possible formulation of electronic music has been realized. 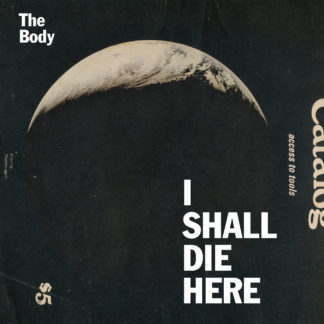