On No One Deserves Happiness, The Body’s Chip King and Lee Buford set out to make “the grossest pop album of all time.” The album themes of despair and isolation are delivered by the unlikely pairing of the Body’s signature heaviness and 80s dance tracks. The Body can emote pain like no other band, and their ability to move between the often strict confines of the metal world and the electronic music sphere is on full display throughout No One Deserves Happiness, an album that eludes categorization. More then any of their genre-defying peers, The Body does it without softening their disparate influences towards a middle ground, but instead through a beautiful combining of extremes. No One Deserves Happiness is an album that defies definition and expectations, standing utterly alone.

Buford and King are outliers at their core, observing the world as if apart from it. They strive for music without a category. They embody many contrasts. They are open and playful as well as thoughtful and disciplined. Live, they deliver punishing volume and scale with their spare duo set up, expanding their sound through a complex set of effects on both guitar and drums. For records, they approach things entirely differently and expand their group in the studio to include Seth Manchester and Keith Souza from Machines with Magnets (their long-time studio), as well as Chrissy Wolpert of The Assembly of Light Choir. The list of instruments used on No One Deserves Happiness is an unexpected collection that includes 808 drum machine, a cello and a trombone. The band employs instruments in their unprocessed state for the simple beauty of the sound, and then in equal measure push them to their most extreme (for example, the sounds at the end of “The Fall and the Guilt” are created by a guitar and a cello). Because they create an entirely singular sound, The Body is in high demand for collaborations with artists across the musical spectrum, from The Bug to Full of Hell to The Haxan Cloak and beyond. They build albums that are as lush and dense as a rainforest and as unforgiving.

Building an album as layered as No One Deserves Happiness is a complex process. Striving for harshness, dynamics and detail all at once poses some technical challenges: It requires that tracks are built up, deconstructed, processed and re-built. Manchester explains that as an engineering team for The Body, Machines with Magnets must always consider the mix — they never go in and record the basics and then mix it. In order to get the immersive experience that is No One Deserves Happiness, they must experiment with and constantly re-evaluate every construct. While they do employ an 808 on this album, they use pre-fabricated samples very sparingly. To get the contrast they are looking for, they experiment with a huge variety of their own sound samples and varying levels of distortion. Reprocessing a few samples of a track can often result in a remix to retain the balance and dynamics they are looking for.

Delicate, ethereal vocals, courtesy of Wolpert and Maralie Armstrong (who wrote and sings the lyrics for “Adamah” and contributes vocals at the end of “Shelter Is Illusory”) sharply juxtapose King’s distinctive, hellish cries. Album opener “Wanderings” is the perfect introduction to No One Deserves Happiness: Wolpert’s angelic calls to “go it alone” build until utter despair takes over, her voice drowned in guitar distortion, and as it is swallowed, we hear the desperate cries of Chip King. The Body then completely switches approaches, starting again with bare drums, but this time more processed and more industrial. The march is quickly augmented by electronics and King’s distant shrieks — this continues to build to the apex of Wolpert’s vocals rising from the oppressiveness and elevating it with her melodies. The contrasting composition and employment of textures on these two songs highlight the Body’s songwriting and arrangement skills. Each track is at once melodic and bleak, employing many of the same instruments but never in the same manner.

The band’s musical tastes are broad, and that is reflected in the wide variety of inspirations they cite for the tracks on No One Deserves Happiness. “Two Snakes” started with a bass line that was inspired by Beyoncé and went through several mutations as the band remixed and reprocessed core elements, vocal melodies morphing into distorted keys, all carried by the foundational bass line. The core duo of The Body has clear ideas of what they want to achieve, but they are completely open to ideas on the execution. This collaborative, open approach allows for a lot of creative input into the building blocks or sounds of a composition that The Body then meticulously arranges. In the same manner as the music, the lyrics are inspired by a variety of literary reference points, from the spoken word piece on “Prescience,” written by Édouard Levé, to the Joan Didion quote inscribed in the album artwork. The Didion passage succinctly sums up an overriding theme of loss and isolation: “A single person is missing for you, and the whole world is empty.”

In the past two years alone, The Body has joined forces with the metal bands Thou, Sandworm, and Krieg, recorded with Wrekmeister Harmonies, and collaborated with electronic producer The Haxan Cloak. They are currently working on a collaboration with The Bug and grindcore band Full of Hell. They have toured with Neurosis (playing large venues) and toured with Sandworm (playing house shows). This unexpected list of collaborators and unpredictable touring approach further emphasizes the demand for the band’s distinctive sound and their open, explorative nature. 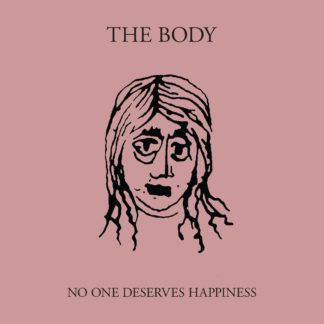 You're viewing: THE BODY No One Deserves Happiness – Vinyl 2xLP (clear with pink smoke) 21.00 €
Buy / Acheter