Over the course of their seven-year run back in the ‘00s, These Arms Are Snakes covered a lot of territory, both in terms of actual miles spent on the road and in terms of their creative bandwidth. Though the band was often mistaken for a typical non sequitur-named screamo outfit or another “animal” indie band, the Seattle group quickly defied expectations and garnered a reputation for subverting the popular underground sounds of time. The group cultivated a small but fervent fanbase across multiple continents with their signature combination of synth-infused noise rock, bad-trip psychedelia, flamboyant proto-metal boogie, and unhinged basement-show hardcore before imploding at the end of 2009. And while These Arms Are Snakes’ full-length albums remain fitting testaments to the band’s frantic urgency and stylistic fluidity, there is a treasure trove of deep cuts buried on b-sides and split releases that further reinforce their position as one of the weirdest and wildest acts of the decade. For the first time, those rarities and one-offs have been compiled into a cohesive overview of These Arms Are Snakes’ lifespan on the double LP Duct Tape & Shivering Crows.

The collection’s track listing runs in reverse chronological order, starting with one of These Arms Are Snakes’ final recordings, the fiery and fuzzed-out scorcher “Meet Your Mayor.” Originally appearing on a small-run split 7” with short-lived UK post-punkers Tropics, the album opener perfectly encapsulates the band’s penchant for hallucinatory guitar hooks, thick bass riffs, rhythmic punch and panache, and Steve Snere’s signature acerbic vocals. The remainder of side A is comprised of the band’s songs from their split LP with Russian Circles—“Camera Shy” and “Trix.” Both tracks showcase a throbbing, locked-in, and heavily punctuated rhythm section garnished with delay-drenched guitar leads—as if Jesus Lizard binged on King Crimson’s Red.

Side B of Duct Tape & Shivering Crows contains two covers—a rendition of Lost Sounds’ “Energy Drink and the Long Walk Home” from a split 7” with The Coathangers and a sinister twist on Nirvana’s “Heart Shaped Box” from Robotic Empire’s In Utero, In Tribute compilation. It also contains two b-sides from the group’s last two LPs. “Washburn” was cut from Tail Swallower & Dove due to vinyl time allowances and later showed up on a split 7” with All the Saints on Touch & Go Records. Similarly, “Old Paradise” didn’t make it onto Easter, but it served to evenly weigh both sides of the album’s lead single on the Good Friday 7”. Side C is dedicated to These Arms Are Snakes’ songs from their collaborative EP with Harkonen released on Hydra Head Records back in 2004. These two songs—“Payday Loans” and “Hook on This”—capture the band at their rowdiest moment… a total throwback to the early ‘90s San Diego-brand of unglued and chaotic hardcore. Side D takes the listeners all the way back to the band’s first demo: four woozy and noise-addled amalgams of math rock and post-punk that would later be polished up for their debut EP This Is Meant To Hurt You.

Taken as an overview of These Arms Are Snakes’ career, Duct Tape & Shivering Crows is an exhilarating study of the band’s sonic evolution, varied musical approaches, and consistent quality. Taken without the historical context or typical considerations for a compilation album, it’s still a cohesive and enthralling record with an arc that takes you from the razor-sharp refinement of their final years through the adrenalized prog-punk explorations of their mid-career work and ultimately ramps up to the narcotic frenzy of their earliest material. If you were a These Arms Are Snakes fan back in the day, this is a crucial addition to your library. And even if you were a dilettante or a naysayer, this collection serves as an exciting recontextualization a band that was often misunderstood and misrepresented by the media.

THESE ARMS ARE SNAKES related 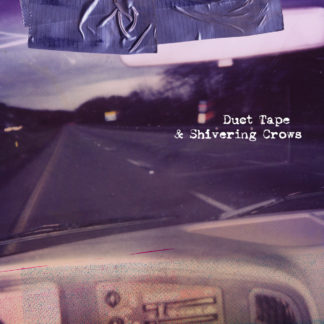