Constantly juggling hardcore and pop projects, veteran Bay Area musician Tony Molina has won over fans in both camps. Since 2002, Molina has played in several bands including Dystrophy, Ovens, Lifetime Problems, Caged Animal, Violent Change and his current solo work. In all of this projects, Molina values lyrical simplicity, structural concision, and the emotional impact of gnarly guitar riffs.

Most recently he released the Six Tracks E.P. through Matador Records’ Singles Going Home Alone series. Featuring five brief power-pop originals on the A-side and a stellar cover of Metallica’s “Orion” on the flip, it contains a bona-fide pop hit in “Breakin’ Up,” a tuff tune that recalls the best of Dinosaur Jr and Teenage Fanclub and sounds for all the world like a great lost 70s radio hit. Pure magic.

Two other recent releases — the wistful riff rock of his first solo album, “Dissed And Dismissed,” and his hardcore band Caged Animal’s barbaric debut EP — illustrate the striking dichotomy that has run throughout Molina’s discography over the last eleven years. As music critic Sam Lefebre wrote, “On Dissed And Dismissed, Molina intensifies the slacker clichés and self-deprecation of 90s indie rock into absurdist hyperbole. He expresses vulnerability and melodrama through bizarre truisms while referencing his forebears: Thin Lizzy leads, Radiohead lyrics, Replacements sneer. Molina appropriates unapologetically (openly paying tribute to Guided By Voices with a sterling cover of their “Wondering Boy Poet”), but distills the past into bursts of reverence less than a minute long.”

“Dissed and Dismissed” was released in early 2013 on San Francisco’s Melters label. The album struck a chord with savvy listeners. gathered some great reviews and rapidly sold-out of its initial pressing. We’re proud to bring you a reissue of this fine album and hope you like it as much as we do. Dig its indelible tunes and shredding leads while we wait for the new Tony Molina full-length, to be released on Slumberland later in 2014. 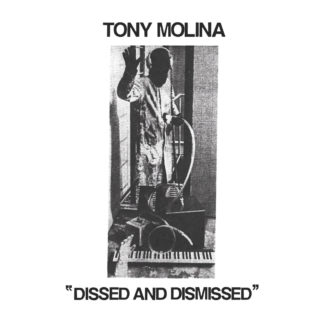