Toxic 2.0 detonates like doomsday all over Primal Future: 2019, an ambitious new mission statement from the man whose guiding forces remain Discharge, Megadeth, Venom, English Dogs, Nuclear Assault, D.R.I., and G.B.H., all juiced by the unrelenting, feverish, urgent power of a modern metal trailblazer.

A dystopian technological takeover drives the album thematically, but the passionately delivered music is vintage Toxic Holocaust, taking things all the way back to the band’s early origins. “When I started the band in 1999 I never imagined I’d still be doing it in 2019,” Grind explains. “I took everything I learned over the last twenty years and used it even as I rewound back to where it started. I recorded Primal Future by myself, even playing drums again, like the early days. I won’t alienate my fans and I also won’t just pander to them. This album bridges the gaps between every era of Toxic Holocaust.” 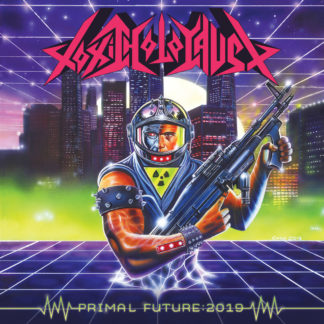