Founded by long time friends and co-combatants Chris Spencer from New York noise stalwarts Unsane, and Steve Austin, Today is the Day’s human guided missile system, UXO are decorated survivors, veterans of countless insurgent noise rock tours and wars, campaigns waged from the early nineties through the approaching collapse of the western world. In the summer of 2013, Spencer flew out to Austin’s compound in wooded Downeast Maine, where the two wrote songs and cut demos for what would eventually become UXO’s debut album. The duo recruited Ironboss drummer Patrick Kennedy (who’d previously played with Steve Austin in Taipan), picked up Boston bassist Aarne Victorine (Whitey), and recorded a proper album. After sifting through a laundry list of names, they settled on UXO, a military acronym short for Unexploded Ordnance. It seemed fitting.

The results are as loud, heavy and abrasive as the band’s pedigree might suggest. Austin and Spencer split vocal duties, and both lay down heavyweight guitar riffage – Austin’s forced death march through Fripp-ian fret heroics over Spencer’s malevolent, neckbent twang. But as much as UXO delivers exactly what the listener might hope for and expect, there are sonic surprises, too, from the Joy Division styled synth blip in “Everything’s A Mistake”, to song passages that blend the uphill trudge of Neurosis with the churning rhythms of the Jesus Lizard. From the slow burning torque and traction of “Bitter” through the hammered-skull frenzy of “User”, UXO’s debut serves as a stark blast of intent: this is not a side project, this is a band for now and a band for the future.

Recorded by Austin, Spencer and Drew Mazurek, across four time zones, the album was then trucked to Northern California, where it was mixed and mastered by engineer Tim Green (Melvins, The Fucking Champs, Cutthroats 9). The cover painting comes courtesy of acclaimed tattoo artist Thomas Hooper. 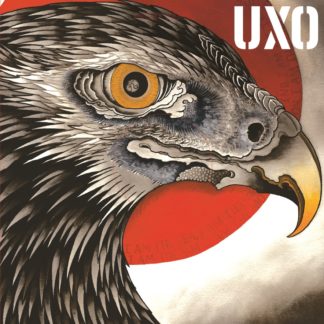