Vastum’s ‘Patricidal Lust’ has been ripped from the muse’s womb through turmoil and strife, reflected not only in the morbid hyper-realism of the album’s content but in the making of the record itself which presented scenarios of devastating real life tragedy, numerous delays, departed members and a sense of frustration by all involved. It’s an album born in pain. Nonetheless, Vastum’s second full length album is noticeably heavier, darker, more abusive and altogether more mentally calamitous than its predecessor ‘Carnal Law’.

Recorded with both Jeff Davis (R.I.P.) and later with Greg Wilkinson at Earhammer Studios, ‘Patricidal Lust’ has an atmosphere of eerie foreboding enshrouding the Doomed Death Metal husk at its center; the cryptic dual vocal dynamic of Daniel Butler and Leila Abdul-Rauf acting as unreliable narrator on this journey through the body. The ghosts of Steer and Schuldiner echo in twisted half-remembered inference while the calculated, blunt rhythm section invoke abhorrent basement torture dungeon; captivity the only reality, death the only hope.

Lyrically far beyond what most Death Metal bands are capable of, Patricidal Lust delves inwardly ever deeper into subject matter first seen on ‘Carnal Law’; the anguish and confusion associated with sexual abuse and incest and the blurry area where eroticism and madness vaporize into an unrecognizable fog of horror, the hellbound heart exposed. Certain to leave a lasting impression, Vastum’s ‘Patricial Lust’ llies at the core of obscene abominations too real for ordinary bands to pursue. Enter Vastum’s theatre bizarre. 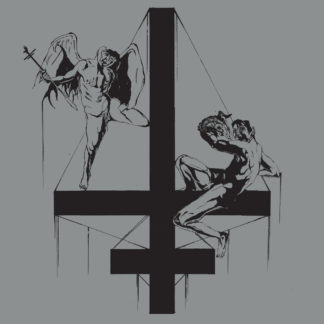