The album starts with a moody, drenched in distortion intro before taking off into first song proper, The Fated Breath. It’s immediately apparent that the band sips from many a cup when it comes to influences. The sound is essentially sludgy death metal but there’s also some attention paid to Neurosis style atmosphere and the angular riffing of Mastodon. There’s a very cool bottom heavy sound to this album that makes these songs sound good.

The band are also unafraid to experiment with sounds that veer into black metal territory as on Dichotomy of Exile with its main riff sounding like vintage Norwegian black metal before going off into a very cool mid tempo groove that owes a slight debt to the whole post metal scene. The guitar fills and leads when they do happen are quite melodic in nature and the band is helped immeasurably by a rhythm section that’s rock solid. The drummer’s performance on Dichotomy of Exile in particular is worthy of mention. Gnosis Unveils is the best song on the album starting off like a typical post metal Red Sparrows kind of thing before going off into some Swedish Stockholm death metal and then following it up with some pure Deicide worship. Elsewhere on the album, Drawn Black Drapes ups the brutality and the band sound quite powerful in full-on death metal mode.

Withered seem like a death metal band at heart but they are also a band that’s willing to stretch the genre and add disparate influences into their sludgy death metal sound. The band write songs that are brutal and heavy but never sacrifice atmosphere and a sense of melody. It’s a delicate balance that the band does well and Folie Circulaire is an album well worth checking out. 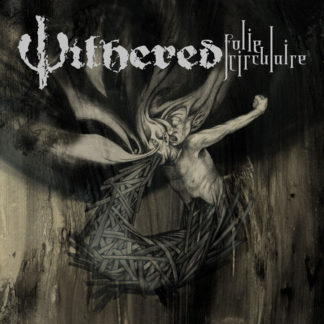