Punk rock institution Bad Religion began recording New Maps Of Hell, the follow-up to 2004’s heralded The Empire Strikes First at Grand Master Studios in Los Angeles in mid-February, just as Greg Graffin was giving midterms at his other job: professor of Life Sciences at UCLA. The lead singer and co-writer laughs, “when I was an undergrad and a graduate student at UCLA, I used to play and write with Bad Religion at night. Now, I’m back to that schedule as a professor.”

Released July 10, 2007, New Maps Of Hell is co-written with Epitaph head Brett Gurewitz, and produced by Grammy-nominated producer Joe Barresi (Tool, Queens of the Stone Age, Weezer). Much of the new material will be debuted to expectant crowds on the main stage of the 2007 Van Warped Tour. Gurewitz states, “we all liked the concept of maps, because we are exploring new material on this record, both musically and topically.” Quite a feat for a band that has been around for 25+ years.

In addition to writing for Bad Relgion, Graffin recently authored a book with Arkansas history professor Preston Jones. Provocatively titled Is Belief In God Good, Bad or Irrelevant? A Professor and A Punk Rocker Discuss Science, Religion, Naturalism and Christianity (IVP Books), the tome catalogs the email correspondence between the two. Jones, a seminal punk fan, initially contacted Graffin by email, prompting the conversations that spawned the book. 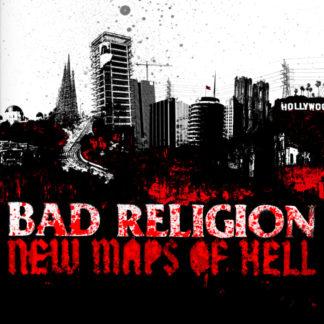