Genuine collaborations between two sets of artists are rare. For their new album, “Stygian Bough Volume I”, the members—Dylan Desmond (bass/vocals) and Jesse Shreibman (drums/vocals)—of doom duo BELL WITCH didn’t just team up (again) with dark folk elegist Erik Moggridge (guitars/vocals) of AERIAL RUIN, they fully integrated the two outfits. While Moggridge has been a part of BELL WITCH’s sonic fingerprint on all their prior records, perhaps most notably for his vocals on their previous full-length, “Mirror Reaper”, he’s now part of the very fabric that makes up the five hauntingly beautiful, strikingly heavy songs that comprise “Stygian Bough Volume I”.

BELL WITCH and AERIAL RUIN are officially a trio on “Stygian Bough Volume I”. The addition of guitar to the bass and drum-only dynamic came naturally as the threesome discussed potential models for their joint effort. Ulver’s unorthodox folk album “Kveldssanger” came up as did Candlemass’ milemarker “Nightfall”. But the real fuel to “Stygian Bough – Volume I” was the BELL WITCH track, “Rows (of Endless Waves), » which was not only Moggridge’s first appearance with BELL WITCH but also a track that has deeply resonated with Desmond over the years. With the approach in place, BELL WITCH and AERIAL RUIN collectively wrote five desolate yet mystical songs that defy categorization. From the mournful « The Bastard Wind » and the crepuscular “Heaven Torn Low I (the passage)” to the monstrous “Heaven Torn Low II (the toll)” and the liturgical gloom of “The Unbodied Air,” “Stygian Bough – Volume I” is an album of deep, dark undertows and careful respite.

Lyrically, the themes explored by both BELL WITCH and AERIAL RUIN independently were tackled from different angles but were mainly from similar spaces. Whereas BELL WITCH plumbed the depths of purgatory—a place of atonement between life and death—across three full-lengths, Moggridge’s AERIAL RUIN have centered on the loss of the self and the spiritual places the vacancy ultimately leads to. For “Stygian Bough Volume I”, BELL WITCH and AERIAL RUIN topics of choice intersect and complement, continuing in spirit but with a broader vantage point where « Rows (of Endless Waves)” left off.

“Stygian Bough Volume I” was recorded and mixed by Randall Dunn at Avast Recording Co. in Seattle. The result is a full-length of profound lows and delicate highs. The overall production fits BELL WITCH and AERIAL RUIN’s quiet/introspective and heavy/loud dynamic well. One listen to « Bastard Wind » and instrumental piece « Prelude, » and it’s easy to understand the trio’s sonic preferences, which fall somewhere between Roy Harper, Bert Jansch, Warning, and Candlemass. As for the triumvirate’s next steps, they’re planning on touring in support of “Stygian Bough Volume I” and eventually collaborating on music for Volume II. 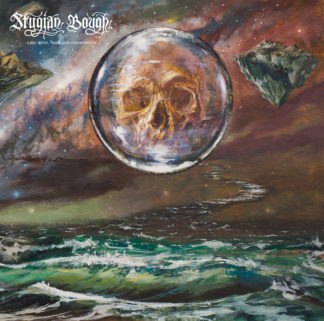