Flys brings together the minds of four musicians known for their work in some of the most extreme, blistering bands today. The quartet was initially started by Full of Hell guitarist Spencer Hazard and former Backslider drummer Patrick Forrest as an outlet to play aggressive music with equal intensity that would contrast the breakneck speeds of their other projects. After asking Backslider bassist Jake Smith to join on guitar and vocals and Triac’s Kevin Bernsten on bass, Eye Flys’ potential for crafting impossibly heavy songs was solidified. Eye Flys’ debut Context was written and recorded just a few short months from the band’s inception, drawing on each members’ considerable experience and driven by the excitement of playing in uncharted territory. This is an album of commanding, lean noise rock absolutely brimming with vitriol.

The direct, raw energy Eye Flys’ music is simultaneously menacing and intoxicating. Drawing immediate comparisons to bands like Unsane, Cherubs, and The Melvins (where they take their name), the quartet’s bludgeoning sound is underpinned by a razor sharp edge. Smith’s vicious lyrics are paralleled by his unrelenting barks with passages like the opening of “Weaponize” literally spat through grinding teeth. Their taut, muscular riffing and pummeling drums lay atop a foundation of deceptively intricate arrangements. Amidst the barrages are layers of subtle melody and textural noise that heighten the album’s contrasting dynamics. Where “Crushing of the Human Spirit” plows ahead with massive thuds, “The Triumph of Hagbard Celine” winds with serpentine phrases and jagged rhythms.

Context is an album about both internal and external perception. From the opening track of the record, Smith poses the question “What the fuck makes you so sure?,” challenging the listener to reflect on their self-assurances. “Dosed,” the album’s most uptempo track, serves as a potent metaphor for the way one’s point of view can shift slowly or in an instant. Smith drew inspiration from the novel Illuminatus!, weaving a layer of tongue-in-cheek apocalyptic discordianism into his fierce snarls. Album closer “Fuckface” takes laser-focus at toxic masculinity with a punishing deluge of howls and concrete-thick hits aimed at men who’s harmful true natures are unveiled, as well as expelling those feelings in oneself.

Eye Flys’ Context stands as a testament to its members’ abilities to produce music that is as ferocious as it is addictive. In just 6 short songs, Eye Flys not only prove their place among their peers, but stand out as a force of sheer, immovable power. 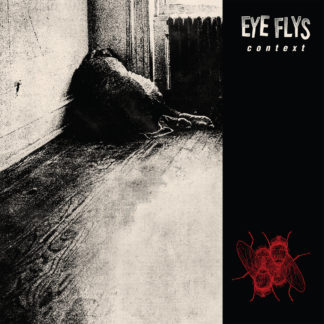