When old time friend and promoter Guillaume Gwardeath asked us about creating and performing an original piece for a “to be defined silent film”, we said yes, but without having any idea where this project would lead us. Then, after some harsh bargaining, YONL finally started to work on C.T. Dreyer’s “Vampyr”.

It was in Fall 2009, a few months before “Ausserwelt” ‘s release. No need to say: facing such a masterpiece forces your humility and curbs your ego at the right place… But we were – and still are – so fascinated by the labyrinth-like metaphysics embodied in this movie than we decided to move on.

One thing was clear : it was out of question to compose a score for “Vampyr”. Instead, all of our souls and bodies should be dedicated into giving life to a sonic reverberation of Dreyer’s obsession for beauty, death, love, vengeance, sin, forgiveness, evil, redemption and faith.

The premiere happened in Bordeaux during Spring 2010. What we think would be a one shot experience soon transformed itself into a two years reverie trip around Europe, be it at Roadburn Festival in the magnificent Midi Theater, under the snowy winter skies of Tallinn, at 2 AM in Germany after a terrific Nifelheim show or in a XVIIth Century fortress in the heart of Carpathian mountains…

YONL played “Vampyr” for the last time in Bordeaux, at Krakatoa, in February 2012. The performance was a recorded one and gave birth to the LP you’re holding in your hands. Facing C. T. Dreyer’s “Vampyr” was always a fragile exercise and sometimes took the form of a metanoia. It marked us both as a band and as persons.

YEAR OF NO LIGHT related 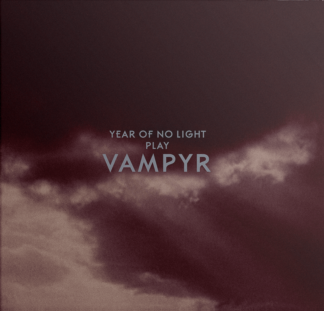