Sightless Pit is the project of duo Lee Buford (The Body) and Dylan Walker (Full of Hell). Buford and Walker are born collaborators, known for their ability to subvert musical expectations, transcend genre and plunge headlong into the unknown. Their work with the likes of Thou, Uniform, Merzbow, and Nothing, taken together with their The Body & Full of Hell albums, have established each as singular voices and masterful alchemists of heavy music. The duo shares an affection for rhythm-based beat music, disparate electronic genres, dub, as well as darkly-hued atmospheric ambience. Lockstep Bloodwar exceeds expectations by stunningly combining the noise and confrontational posturing they are both well known for with pulsing and kaleidoscopic electronic samples, drum machines, and grizzled synths. Across the album, the two highly inventive musical omnivores are buoyed by an astounding menagerie of eclectic and celebrated collaborators.

Lockstep Bloodwar is a dub album composed by Buford and Walker with a sonic palette drawn from heavy music. The pair, enamored by the space and depth of dub, as well as the creative production techniques of the genre, wanted to employ its approach to harsh and foreboding sounds, a natural continuation in their explosions of boundaries. The duo built the sonics of each piece with distinct guest artists in mind, allowing them space to alter the direction of each track while maintaining a distinct, cohesive vision for the album. Midwife’s signature ethereal voice undulates suspended in time on “Resin on a Knife.” A protean performance from Elizabeth Colour Wheel’s Lane Shi Otayonii drives “Flower to Tomb” from obliterating squalls to anthemic rounds. An autotuned Claire Rousay expands the range of Sightless Pit’s dynamic compositions. The distinctive nature of their approach is nowhere more evident than when looking at the stark contrast of songs like “False Epiphany” and “Low Orbit” from the Industrial Hazard’s (aka Spencer Hazard of Full of Hell) noise-riddled onslaught to clubby dance hooks from Gravediggaz/Stetsasonic rapper Frukwan. This seamless mashup of disparate influences is also apparent on the exhilarating “Calcified Glass,” where YoshimiO’s (Boredoms/OOIOO) processed voice and drums spar with Walker’s howls before succumbing to defiant bars from Three 6 Mafia’s Gangsta Boo. Sightless Pit, with the help of engineer Seth Manchester, produce a strikingly seamless balance between entirely unexpected sonic combinations wrapped with high caliber collaborations to create an invigorating, inventive and undeniably listenable album.

An aura of brusque confrontation and grime is sheathed around Lockstep Bloodwar and its multiplicity of noises and raw energy. Buford’s signature rhythmic voice stretches into new complex patterns while retaining an unearthly punch, with gargantuan bass thuds and deft syncopations capable of transforming a song’s landscape in an instant. A spirit of malcontent and caged frustrations oozes from within each piece manifested in spiraling low end throbs and Walker’s pained wails. Walker describes the underlying worldview of the album: “Lockstep Bloodwar is the struggle to comprehend and come to terms with the fact that our lives are on a locked track, and the track is violent and painful. We have zero control over our lives on any kind of scale and even the simplest existence is a selfish and violent one.”

Buford and Walker are sonic inventors who, armed with an array of voices complimenting their own as Sightless Pit, push back against the locked track of life, presenting escape routes and musically giving voice and agency to all of us navigating an increasingly hostile world. 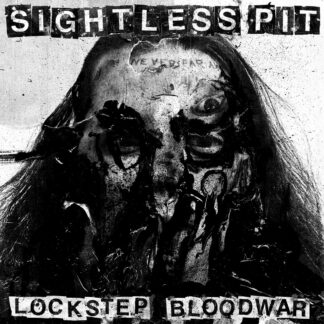